This sample Absolute Income Hypothesis Research Paper is published for educational and informational purposes only. If you need help writing your assignment, please use our research paper writing service and buy a paper on any topic at affordable price. Also check our tips on how to write a research paper, see the lists of research paper topics, and browse research paper examples.

The consumption function, a key behavioral relationship in macroeconomics, was first introduced by John Maynard Keynes (1883–1946) in 1936. While Keynes offered no precise functional formulation of the propensity to consume (in his original terminology), his analysis has come to be associated with a simple version of the consumption function that embodies only the more quantitative aspects of his considerations, popularly known as the simple Keynesian consumption function or absolute income hypothesis (AIH).

The most common representation of the AIH is the linear function (inclusive of an intercept) that satisfies (1), (2), and (3), but not (4) (see Figure 1). Such a simple linear consumption function is to be found in nearly all introductory macroeconomic textbooks. 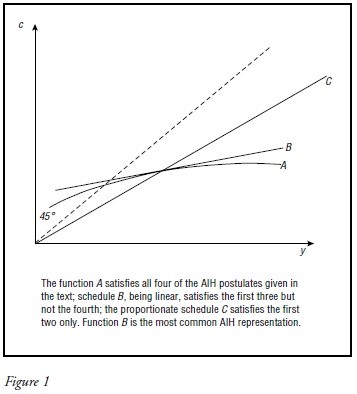 While early empirical work found support for the AIH and the proposition that the APC falls as income rises, long-run data offered contrary evidence (Kuznets 1946). This indicated that the APC out of national disposable income appeared not to vary with rising income over the relatively long run; in particular, it did not fall as disposable income rose, as predicted by the linear AIH inclusive of an intercept. Rather, the apparent constancy of the APC suggested a long-run proportional consumption function (C ), such that the APC equals the MPC. In contrast, the examination of household budget data (Brady and Friedman 1947) revealed the cross-section consumption function to have a positive intercept, and a lower MPC than APC in any given year (B). The dilemma therefore arose of how to reconcile the long-run proportional consumption function with the finding from shortrun and cross-section analyses that the APC exceeded the MPC.

It should also be noted that the AIH predicts a simple positive relationship between consumption and income, such that the two should not move in opposite directions, nor one change and not the other. However, data shows the two variables disobey this suggested relationship, the most prevalent of such irregularities involving an increase in consumption with a decrease in income, which the AIH is unable to account for. Moreover, the AIH consistently underpredicted consumption for the mid-twentieth century. The is partly explained by noting that during and immediately following World War II (1939–1945), increases in income could not be translated into increased expenditure due to rationing, forced holdings of liquid assets being subsequently converted into increased consumption demand following the relaxation of rationing. Such reasoning suggests that assets, and thereby wealth, may be a significant consumption determinant, and gave rise to modern theories of consumption, such as the life-cycle hypothesis (Modigliani and Brumberg 1955; Ando and Modigliani 1963) and the permanent income hypothesis (Friedman 1957), which emphasize the role of wealth and other factors in explaining the paradoxes noted above.