This sample Aggregate Supply Research Paper is published for educational and informational purposes only. If you need help writing your assignment, please use our research paper writing service and buy a paper on any topic at affordable price. Also check our tips on how to write a research paper, see the lists of research paper topics, and browse research paper examples.

The economist John Maynard Keynes defined the aggregate supply function as the relation between the level of employment and the aggregate supply price, which is the expectation of proceeds that makes it just worthwhile for firms to offer that level of employment, and distinguished it from the aggregate demand function that shows the relation between the proceeds that firms expect to receive and the level of employment. The modern use of aggregate supply and demand remains close to Keynes’s usage but replaces the relation between the value of output (or total proceeds) and employment to that between the price level and the quantity of output. Early economics textbooks after Keynes took the aggregate supply (AS) curve to be positively sloped like its microeconomic counterpart, but as shown in Figure 1, assumed it to be relatively flat at low levels of output, having an upward slope at intermediate levels, and to become increasingly steeper as the economy approaches full employment. At low levels of output many resources, including labor, are unutilized, and increases in output can be obtained without increases in input prices and without experiencing significant diminishing returns, so that firms are willing to produce more without any increase in the price. As output expands, diminishing returns sets in and input prices begin to rise, so that firms require a higher price to produce more. Finally, when full employment of labor is reached with the corresponding output level shown by Yf in Figure 1, no further expansion in output is possible.

In subsequent (late twentieth-century) presentations this representation has been replaced by a variety of others, the relevance of which depend on the precise assumptions made about the economy and the time horizon one has in mind. The most popular representation, common to a number of Keynesian and monetarist approaches, takes the short-run aggregate supply curve to be positively sloped, as shown by the curve AS in Figure 2, and the long-run aggregate supply curve as vertical as shown by the vertical line at Yn (denoting the natural level of employment, which is consistent with wage-price stability) in the figure. The short-run curve can extend beyond the long-run curve as shown in the figure, implying that the economy can in fact produce beyond the level shown by the longer-run curve, for instance by hiring more workers than normal by paying overtime wages. 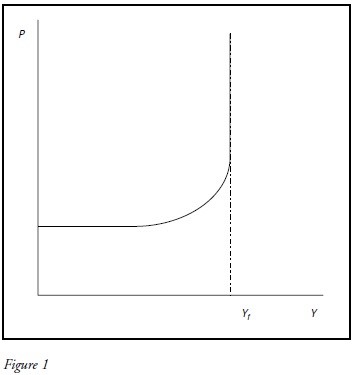 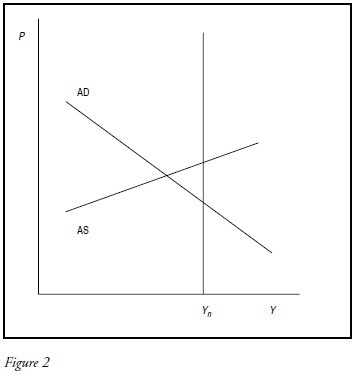 There are several interpretations of this configuration. One interpretation—common among the neoclassical synthesis Keynesians—assumes that firms operate in a perfectly competitive market and with diminishing returns to labor. With the money wage given in the short run, a higher price makes profit-maximizing firms increase employment and production. With the money wage flexible in the longer run, the money wage changes; if there is unemployment, the money wage falls, so that the aggregate supply curve shifts down. In the long run the economy is at full employment, where the demand for labor and the supply of labor (both of which depend on the real wage) are equal, so that the economy is at Yn in the figure. A second interpretation—made by the early monetarists—takes the price level expected by workers to be given, but allows the money wage to adjust to clear the labor market, in the short run. A higher price increases the money wage as firms increase their demand for workers, and workers supply more labor because with the fixed expected price their expected real wage is higher. Over the longer run the expected price adapts to the actual price, which shifts the AS curve; in long run equilibrium price expectations are fulfilled and the economy is at Yn. A similar interpretation—often made by new Keynesians— assumes that the money wage depends on the expected price and on labor market conditions reflected by the unemployment rate, and that the price level is determined by firms as a markup on unit labor costs. In the short run, with expected price given, a higher level of output implies a lower unemployment rate, a higher money wage and a higher price. In the longer run, as expected price adapts to the actual price, the AS curve moves; for instance, if the economy produces below Yn, the expected price falls, so that the AS curve shifts down. The long-run supply curve is given at the natural rate of unemployment at which the wage and price are stable, as determined by labor market conditions and the pricing policies of firms. Unemployment may prevail due to, for instance, firms keeping wages higher than the market, clearing one to make workers exert more effort, thereby becoming more productive.

In all of these interpretations, in the short run the economy is on the AS curve, at a position determined by the AS curve and the downward-sloping aggregate demand (AD) curve. Since the short-run position of the economy is not at Yn, the price and wage will change; at the intersection shown in Figure 2, the price and wage falls so that AS shifts down, and the economy moves along the AD curve until long-run equilibrium is attained at Yn, so that the vertical line can be given the interpretation of the long-run AS curve. This adjustment occurs because (as is shown by the negative slope of the AD curve) a reduction in the price reduces the demand for money (since less money is required to make transactions), which makes asset holders want to lend more thereby reducing the interest rate and inducing more spending. The nature of the short-run and long-run aggregate supply curves, given by AS and Yn, implies that changes in the aggregate demand curve (such as fiscal and monetary policy shifts, or changes in expectations which affect investment) have an effect on output in the short run, but not in the long run.

This interpretation, however, is not accepted by all approaches. Some take the view that the economy is always on the vertical curve, so that it is the only AS curve for the economy. These views, which are associated with the new classical approach, assume that the money wage is perfectly flexible (in contrast to the neoclassical Keynesians) and that economic agents have rational expectations (in contrast to the early monetarists) and do not make systematic forecasting errors, so that it is inappropriate to take the expected price as given in the short run. In this approach, the AS curve is the vertical curve at full employment, so that aggregate demand shifts do not affect the level of output. However, this result need not hold if there are wealth effects on labor supply. With the traditional interpretation based on the supply and demand for labor and market clearing wage, a change in the price level can affect the value of real wealth, which in turn can affect the supply of labor and the level of employment.

Approaches having the rising short-run AS curve need not accept the interpretation that vertical curve is the long-run AS curve. First, the economy may not converge to Yn, so that the vertical line cannot be given the interpretation of the long-run supply curve. For instance, if the economy is below Yn in the short run, the downward shift in the AS curve need not take the economy to Yn if the AD curve also shifts to the left or because it is not negatively sloped if, for instance, as the money wage falls aggregate demand falls as wage income falls (with a higher propensity to spend out of wage than out of profit income) or because firms reduce investment when the price falls. Second, even if the economy converges toward Yn, its level may change endogenously, so that the longrun supply curve need not be vertical. For instance, according to some new Keynesian contributions, a fall in output and employment below the natural rate can make outsiders in the labor market lose their ability to reduce the wage, which increases the natural rate of unemployment and reduce Yn. In these cases the aggregate supply side of the story implies that the aggregate demand side can have effects not only in the short run, but also in the longer run.