This sample Anxiety Research Paper is published for educational and informational purposes only. If you need help writing your assignment, please use our research paper writing service and buy a paper on any topic at affordable price. Also check our tips on how to write a research paper, see the lists of research paper topics, and browse research paper examples.

Anxiety is a universally experienced emotion felt as an unpleasant, tense anticipation of an impending but vague threat. Some 18 percent of the adult U.S. population experiences anxiety symptoms to the extent that they can be diagnosed as suffering from an anxiety disorder. Anxious people often feel as if something bad were about to happen to them, although they might be unable to identify an immediate threat. The emotion of anxiety is in many ways similar to fear, although fear is typically defined as an emotional reaction to a clearly identifiable threat, such as a charging elephant or the possibility of falling when leaning over the edge of a tall building.

Fear and anxiety have in common several reaction patterns. One typical anxiety response is a sense of choking or constriction, felt as a lump in the throat. Indeed, the Latin root of the term anxiety is angh, meaning “constriction.” Also related is the Germanic word angst. However, an anxiety reaction is more than a lump in the throat, as described by psychologist Stanley J. Rachman, one of the leading authorities on anxiety and anxiety disorders. Most experts agree that there are three partially integrated response systems that account for the various symptoms and therefore make up the full experience of anxiety. These are the cognitive, physiological, and behavioral response systems. Examples of each are described in Table 1.

Sigmund Freud (1856–1939), the founder of psychoanalysis in the late nineteenth century, is credited with explication of the role of anxiety in affecting people’s daily lives. Freud postulated three types of anxiety. He called a reaction to a real or potential threat reality anxiety, whereas anxiety generated within the psychic apparatus as a threat to the ego was called neurotic anxiety. According to Freud, the ego keeps its instinctual sources of threat out of conscious awareness so that the true source of neurotic anxiety remains obscure and is experienced as “free-floating” or unattached anxiety. Freud also described moral anxiety, arising from an impending or actual violation of internalized standards. Moral anxiety is experienced as shame or guilt. 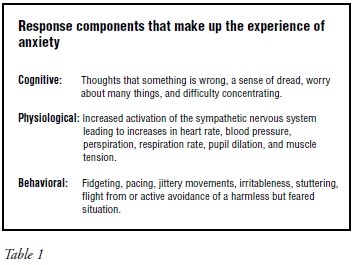 Another, more recent characterization of anxiety types is psychologist Charles Spielberger’s state-trait distinction. State anxiety refers to an individual’s anxious feeling at a given time: “Are you anxious right now?” Trait anxiety refers to one’s state of anxiety in general: “Are you an anxious person?” State anxiety is more akin to fear as a response to a specific situation, whereas trait anxiety is part of one’s overall personality.

The most common source of anxiety or fear is the perception that one is in imminent psychological or physical danger, or might be at some future time, such as feeling anxious about an impending dental appointment. Another common source of anxiety is concern over what other people might think of you. This social anxiety is particularly prevalent among adolescents, who worry that they might be scrutinized by others and be found lacking in appearance, skills, or behavior.

Although most anxiety is precipitated by perceived environmental threats, there are clear individual differences in how people perceive and react to potential threats. There is good evidence that some people are genetically predisposed to be more anxiety-reactive than others. Furthermore, a number of physical and medical conditions can cause anxiety symptoms that resolve when the condition is successfully treated. A sample of these anxiety inducing medical conditions is shown in Table 2.

The experience of anxiety is virtually universal among humans and most vertebrate animals. Most anxiety is experienced within the normal range, where it escalates under perceived stressful situations (e.g., taking a test) and then diminishes as the threat wanes. However, for those whose anxiety is severe enough to be diagnosed as an anxiety disorder, the experience of anxiety is chronic, debilitating, and interferes with personal, social, and occupational functioning. The various disorders have in common an exaggerated sense of fear, anxiety, and dread; yet each has a distinctive pattern to its expression. 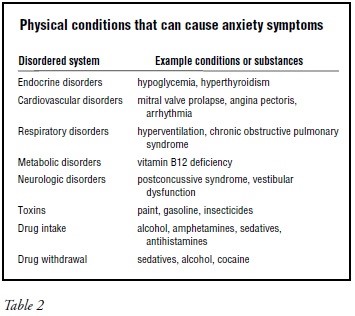 Specific phobias are morbid and irrational (relative to the potential for actual danger) fear reactions to specific objects and situations. The phobic person attempts to avoid or escape from these objects or situations at all cost. Common examples include phobias of small animals (e.g., rats, snakes, spiders), heights, and injections of medicine. Social phobia involves fear and anxiety reactions to situations in which a person believes that he or she might be observed by others and be negatively evaluated or might embarrass himself or herself. Public speaking, using public restrooms, and eating in public are among the more common social phobia situations.

Generalized anxiety disorder involves a chronic state of worry, apprehension, and anticipation of possible disaster, no matter how unlikely it is that the disaster will occur. Individuals with panic disorder might have a sudden attack of intense anxiety or panic that hits them unexpectedly, out of the blue. In certain cases, when these unexpected panic attacks occur outside the home, people become fearful that another attack might strike if they go out again. When they become so fearful of having another attack that they cannot leave their home or safe haven, they are diagnosed as having panic disorder with agoraphobia. Posttraumatic stress disorder can occur following a terrifying event. The person might experience persistent, frightening thoughts and images as flashbacks to the original trauma. Individuals with obsessive-compulsive disorder experience anxiety-related thoughts and feel compelled to enact compulsive rituals, such as washing their hands repeatedly, lest they experience even more intense anxiety.

One of the most serious consequences of untreated chronic anxiety disorders, which are often accompanied by depression, is the increased risk of substance abuse as a form of self-medication. Other consequences of the constant worry and accompanying physical tension are gastrointestinal distress, insomnia, headache, high blood pressure, hyperventilation, nausea, and fatigue. 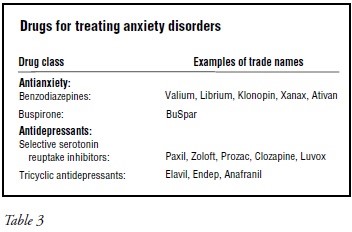 Anxiety disorders are among the most successfully treated of all mental disorders. Two basic approaches contribute to this effectiveness: psychotherapy (specifically, cognitive-behavioral therapy) and pharmacotherapy. The effective therapeutic processes in cognitive-behavioral therapy include helping patients alter negative anticipatory thoughts that often trigger anxiety symptoms and helping them confront their feared situations directly, which allows the anxiety symptoms to dissipate. To facilitate these processes, training in cognitive coping skills and deep relaxation are typically included in a cognitivebehavioral therapy treatment protocol.

Two classes of drugs are known to be effective in treating some anxiety disorders. Antianxiety drugs, primarily benzodiazepines, can reduce anxiety and panic symptoms but they have the serious drawback of physical dependency if taken for extended periods. Many antidepressants, particularly selective serotonin reuptake inhibitors and tricyclics, also have antianxiety properties. Examples of these antianxiety drugs are listed in Table 3.