This sample Balance of Payments Research Paper is published for educational and informational purposes only. If you need help writing your assignment, please use our research paper writing service and buy a paper on any topic at affordable price. Also check our tips on how to write a research paper, see the lists of research paper topics, and browse research paper examples.

The balance of payments is an accounting statement that records transactions (trade in goods, services, and financial assets) between a country’s residents and the rest of the world. Those transactions consist of receipts and payments—credits (entries that bring foreign exchange into the country) and debits (entries that record a loss of foreign exchange), respectively—that are recorded through the use of double-entry bookkeeping. Balance-of-payments data usually are reported quarterly in national publications and also are published by the International Monetary Fund.

The Current, Capital, And Financial Accounts

The balance of payments consists of the current account, the capital account, and the financial account (see the illustration). The current account includes trade in merchandise (raw materials and final goods), services (transportation, tourism, business services, and royalties), income (from salaries and direct, portfolio, and other types of investment), and current transfers (workers’ remittances, donations, grants, and aid). The current account is related to the national income accounts because the trade balance corresponds broadly to the net export value recorded in the national income accounts as one of the four components of the gross national product (GNP), along with consumption, investment, and government expenditures.

The balance of payments should always be in equilibrium. The current account should balance with the sum of the capital and financial accounts. However, because in practice the transactions do not offset each other exactly as a result of statistical discrepancies, a separate line with those discrepancies is included in the statistical presentation.

If the current account is in equilibrium, the country will find its net creditor or debtor position unchanging because there will be no need for net financing. Equilibrium in the capital and financial accounts means no change in the capital held by foreign monetary agencies and reserve assets. In the case of disequilibrium arising when a country buys more goods than it sells (i.e., a current account deficit), the country must finance the difference through borrowing or sale of assets (i.e., there is an inflow of capital and thus a capital and financial account surplus). In other words, the country uses foreign savings to meet its consumption or investment needs. Similarly, if a country has a current account surplus, the capital and financial accounts record a net outflow, indicating that the country is a net creditor. The exchange rate regime is an important determinant of the adjustment toward the new equilibrium. With fixed exchange rates, central banks must finance the excess demand for or supply of foreign currency at the fixed exchange rate by running down or adding to their reserve assets. Under floating exchange rates, balance of payments equilibrium is restored by movements in the exchange rate.

Theories  nd Assessment of the Balance of Payments

A number of theories have been developed to explain the adjustment process of the balance of payments. In a world without capital flows the elasticities approach provides an analysis of how changes in the exchange rate affect the trade balance, depending on the elasticities of demand and supply for foreign exchange and/or goods. An exchange rate depreciation increases the domestic price of imports and lowers the foreign price of exports. However, depreciation reduces imports only if import demand is elastic; the same is the case for the behavior of exports after a decline in export prices. Thus, the final impact on the current account balance depends on the elasticity of demand in each country for the other country’s goods and services. 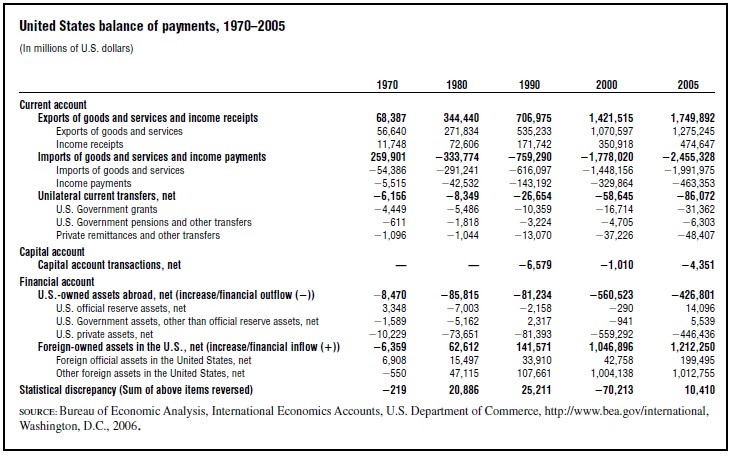 The absorption approach emphasizes the way in which domestic spending on domestic goods changes relative to domestic output: The trade balance is viewed as the difference between what the economy produces and what it spends. In an economy that is operating below its full potential an exchange rate depreciation tends to increase net exports (given the elasticity conditions noted above) and bring about an increase in output and employment. In an economy operating at full potential, in contrast, a depreciation tends to increase net exports, but because it is not possible to increase output, the result is higher prices of domestically produced goods.

In the modern global economy with well-developed financial markets and large-scale capital flows, financial assets play an important role in the analysis of the balance of payments. The lifting of controls on the movement of capital and financial flows has been fundamental to promoting world trade and eventually greater incomes. The unrestricted movement of capital allows governments, businesses, and individuals to invest capital in other countries, thus promoting not only foreign direct investment but also portfolio investment in the capital market.

With perfect capital mobility, monetary and fiscal policies affect the balance of payments through the interest rate channel. Under fixed exchange rates an increase in the money supply will reduce interest rates and lead to capital outflows, tending to cause a depreciation that will have to be offset by sales of foreign exchange by the central bank. This will then reduce money supply until it reaches its original level. Thus, monetary policy is ineffective in increasing output. Fiscal policy, however, is highly effective because a fiscal expansion tends to raise interest rates, leading the central bank to increase the money supply to support the exchange rate, reinforcing the impact of the expansionary fiscal policy. Under floating exchange rates, monetary policy is highly effective and fiscal policy is ineffective in changing output. A monetary expansion leads to depreciation and higher exports and output. Fiscal expansion, in contrast, causes an appreciation of the exchange rate and crowds out net exports.

The introduction of interactions between prices and changes in the exchange rate leads to a model that postulates that price flexibility ultimately moves an economy to full employment. The mechanism involves changes in the domestic money supply that take place as the central bank keeps selling foreign exchange to domestic residents in exchange for domestic currency. A monetary contraction thus reduces prices, improves competitiveness, and increases net exports and employment. Under floating exchange rates, in the short run a monetary expansion increases output and reduces interest rates, causing a depreciation of the exchange rate. In the long run, however, a monetary expansion increases the price level and the exchange rate, keeping real balances and the terms of trade unchanged.

Maintaining a favorable balance-of-payments position is important for macroeconomic stability, and countries gear their policies toward achieving that goal. Although current account deficits that are financed through non-debtcreating capital flows may not pose an immediate threat, large and unsustainable deficits can transform into chronically unfavorable balance-of-payments positions that may affect the stability of the currency. Correcting such unfavorable positions is done through the adoption of stabilization programs that sometimes are supported by the International Monetary Fund through the provision of short-term financing to ease the burden of temporary problems.