This sample Catastrophe Theory Research Paper is published for educational and informational purposes only. If you need help writing your assignment, please use our research paper writing service and buy a paper on any topic at affordable price. Also check our tips on how to write a research paper, see the lists of research paper topics, and browse research paper examples.

Much of quantitative social science (such as principal factor analysis, linear regression, and least squares) seeks linear relationships among many variables. “Nonlinear” methods often seek to warp variables to bring them into linear relations, just as taking logarithms changes exponential growth into correlation with time, but allow more transforms. This approach fails for topologically nonlinear relationships such as (see Figure 1) the condition x2 + y2 = 1 between x and y. Knowing the value of x limits what is possible for y, but evenly scattered points (x,y) on the circle show no linear correlation between x and y, and no principal factor in any direction. No transformations of the variables improves this. 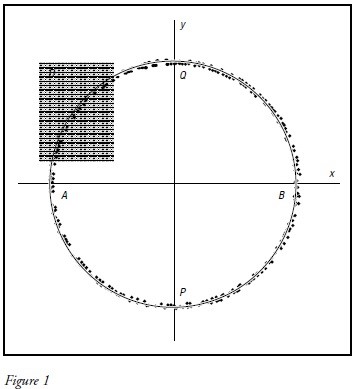 A mutual information test would reveal a link between x and y, but say little about its structure. Local analysis says more. The region D shows a strong linear relation between x and y, just as linearly testing temple attendance versus income on one Delhi suburb works better than on worldwide data. Around the points A or B, fitting a linear y(x) reveals little: y is no function of x there (or at P and Q, vice versa). Nevertheless, x and y have a fold relation of a very common type. Just as “more equations than unknowns means no solutions,” almost every failure of a y(x) model for an (x,y) curve is a fold. With a smooth reparametrization it fits a piece of parabola. Globally there may be more than one fold: Figure 2 shows a more common relation between the two than the circle. This is more common partly because it can arise as part of the cusp (see Figure 3), which Hassler Whitney in the 1950s showed to be the almost-universal local relation between two surfaces where they cannot be adjusted to a linear or fold description. 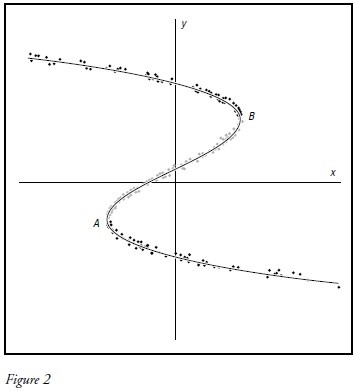 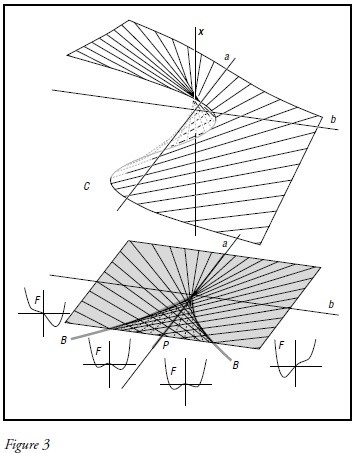 René Thom in the 1960s developed a more general theory. This emphasizes the curves, surfaces, and so forth, arising as sets of minima, maxima, and other level points when changes in an external factor modify a function F of a multivariable internal x. Level points (energy-minimum equilibriums, etc.) represent simpler long-term behavior than limit cycles and chaotic attractors, and Thom thus referred to this as “elementary” catastrophe theory. “General” catastrophe theory would include changes of chaotic regime, but the term has settled on the narrower use. The cusp, fold, and so on arise in both contexts. The (a,b) plane in Figure 2 generalizes the “phase diagram” of thermodynamics: crossing P changes which minimum is the deepest, while crossing B changes which minima even exist. Some systems always adopt the deepest minimum, others hold to a minimum until it vanishes, but in either case a smooth change in (a,b) can force a jump in x. The external factors might be, for example, gross economic indicators, while x represents all the alternatives of hiring, capital expenditure, shift timing, and so forth, over which a firm must maximize profit F—subject to the modifying external factors. (Figures 2 and 3 gray out states such as local minima of profit or maxima of pain, which a system actively avoids.)

Rigorous treatments of the mathematics include the work of V. I. Arnold, while Tim Poston and Ian Stewart aim at a wider scientific audience. Remarkably, the fold and cusp structures arise regardless of any (finite) number of variables needed to describe x. For 1-D and 2-D external factors, with scalar F and in the absence of special symmetries, any other structure falls apart into cusps and folds as easily as three planar lines through a common point fall into three crossings. They can occur in multiple places, such as the two folds in Figure 2, and in continua for n-D externals, such as the fold curve C (not isolated fold points) in Figure 3, but 1-D and 2-D externals make them the universal local forms or “elementary catastrophes” (suggesting in French sudden discontinuity, as in departing “en catastrophe,” but not necessarily disaster). Three external dimensions allow three more of these forms: 4-D gives another two, for the total of seven, which caught media attention. In higher dimensions they can still be classified, and have been applied in quantitative physics, but arise in continua of types rather than a small finite set. When the function F is replaced by vector dynamics, there are discontinuities (such as onset of oscillation or chaos, and self-organized criticality) not covered by this “elementary catastrophe” list.

Physics, engineering, and, increasingly, biology have successfully applied the methods by which the classification is reached, usually as part of the general “bifurcation theory” toolkit, to nonlinear models with precise data. Research in the social sciences has often attempted to use the classification theorem, not always appreciating the reparametrizations essential to it, or its local nature (folds and cusps are often multiple). Social complexity and noisy social data require multivariable models and statistical tools, even when a linear model is possible. A nonlinear model with few parameters can sometimes replace a linear one with many, as Johannes Kepler’s (1571–1630) three laws replaced the hundreds of circles of Ptolemy (2nd century CE) and Nicolaus Copernicus (1473–1543). More often, essential nonlinearity in a few key directions must be combined with linearizability (differentiability) in many other directions: simply superposing the (b,x) folds around C in Figure 3, without adjusting for a, masks their structure. Bifurcation modeling for the social sciences must include tools such as principal factor analysis, not replace them. This extended theory is not yet in place, but the work of Courtney Brown represents important progress.