This sample Cobweb Cycles Research Paper is published for educational and informational purposes only. If you need help writing your assignment, please use our research paper writing service and buy a paper on any topic at affordable price. Also check our tips on how to write a research paper, see the lists of research paper topics, and browse research paper examples.

Cobweb cycles are the result of lagged response of commodity production to price changes, due to the intrinsic delay between production decisions and actual supply of goods. The typical example is agricultural production, where gestation lags can vary from one season (as with corn) to a few seasons (livestock) to some years (fruit trees).

The idea is rather old: It was applied to agricultural cycles in the 1820s, and it provided the basis for a nonagricultural cycle model by John Wade in 1833. In more recent times, Albert Aftalion’s business cycle theory also relied on prices sending wrong signals to entrepreneurs because of a lag between production and supply preventing the system from settling into equilibrium (1913). The first analytical treatment, however, came in 1930, when the independent researches of Jan Tinbergen, Umberto Ricci, and Henry Schultz (all published in German) looked at such cycles as examples of the introduction of time lags in the adjustment process after a disturbance to equilibrium in the commodity market occurs. These authors, elaborating on Arthur Hanau’s finding that hog production in Germany was influenced by past hog prices, showed that lags generate two-phase discontinuous cycles, of a period twice the lag and of constant, increasing, or decreasing amplitude depending on the relative elasticities of the supply and demand curves. Figure 1, which represents the diverging case, is self-explanatory as to the origin of the term cobweb cycle (apparently coined by Kaldor 1934 in English and by Leontief 1934 in German).

In 1934 Wassily Leontief examined the case of nonlinear supply and demand curves, and showed that certain conditions can give rise to persistent limit cycles, to which the system would converge. 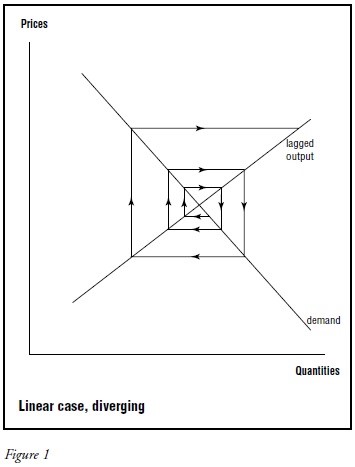 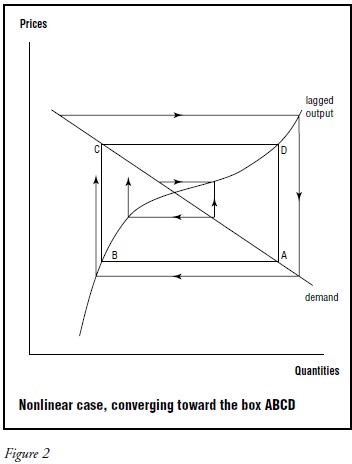 The analysis was further generalized in two directions. The simplest treatment assumed that production decisions react on the market price prevailing at the time, thus implying specific rules about the formation of expectations. A first generalization considered distributed lags, either by treating the expected price as a weighted average of past prices, or by supposing that producers react not to immediate price variations but to their expectation as to the “normal” price level; the latter is revised period after period, adapting it to the movement of actual prices (Nerlove 1958). This stabilizes the model to some extent, the more so the less the weight of recent events with respect to past ones.

A second generalization disposed of the determinism of the model by introducing an error term. The corresponding modelling develops the suggestion derived from John Muth’s observation that “farmers’ expectations and the prediction of the model have the opposite sign” (Muth 1961, p. 331; similarly, pp. 333–334): Stochastic models have been elaborated assuming instead that expectations are rational, thus postulating that they are unbiased with respect to the theory’s prediction—that is, not systematically wrong in an easily predictable way (see, for example, Pashigian 1970).

As these developments of the simplest model occurred, the reflection on the epistemic implications of the cobweb phenomenon was turned on its head. Its first formulation immediately suggested that the instability potentially caused by the lag could offer an escape to the contradiction, widely perceived in the 1920s and 1930s, between the persistence of cycles and the dominant static economic theory, which postulated that a disturbed system would gravitate toward its equilibrium position so that persistent fluctuations could only be explained in terms of systematic exogenous shocks (Ezekiel 1938, pp. 255 and 278–280; Kaldor 1934, pp. 132–136;

Rosenstein-Rodan 1934, pp. 91–92). The limit cycles of the nonlinear cobweb led to the interpretation of the cycle as a “generalized equilibrium state” (Samuelson 1948, pp. 371–373), that is, of a possible state of periodic or quasiperiodic motion as “natural” as the stationary state was for static economics.

The reflections on expectations brought the discussion about how to explain the cycle back to its starting place. The assumption of adaptive expectations itself implied an increased stability of the system by electing the long-run normal price as the determinant of output (Mills 1961, p. 334). Finally, the postulate that expectations are rational assumes the cycle away, except as the consequence of the summation of random exogenous shocks on which the burden of the explanation is shifted (Muth 1961, p. 333; Pashigian 1970, p. 352).