This sample Communication Networks Research Paper is published for educational and informational purposes only. If you need help writing your assignment, please use our research paper writing service and buy a paper on any topic at affordable price. Also check our tips on how to write a research paper, see the lists of research paper topics, and browse research paper examples.

Communication network study did not progress very much  in  the  ensuing decades, because social scientists concentrated on taking random population samples that disconnected people from their social and communication networks (Rogers and  Kincaid 1981). There  was little research centered on how a person’s relationships, as measured by their communication patterns or partners, affected their behavior. Gradually, however, a science of social networks has emerged, using two different research methodologies: local and global.

Local network research is conducted by asking people to name others they are close to or talk to about important matters (Burt 1985). The names provided (and they can  be  first names only or  initials) comprise what  is known as an egocentric network; the respondent is then asked for information about each of the persons named. Typically, the list is confined to five or six network partners. Researchers can then describe respondents based on the characteristics of their egocentric network. For example, respondent networks can be characterized according to the number or percent of males, people of the same religious affiliation, or people living near or far from the respondent. Importantly, one can also measure the behaviors exhibited in the network, by, for example, considering whether each network partner  provides social support, expresses opinions, or engages in behaviors relevant to the respondent or study.

Global network research is conducted by defining a boundary around a set of respondents and asking everyone to name others in the network they talk to or seek advice from (the researcher can also provide a roster for the respondent to refer to). Full names or other identifying information are provided so that the researcher can draw a map (see Figure 1) of the relations within the network. This so-called sociometric or census approach is the most powerful network methodology. The network data are used to describe individuals and/or the entire network (Scott 2001; Wasserman and Faust 1994). 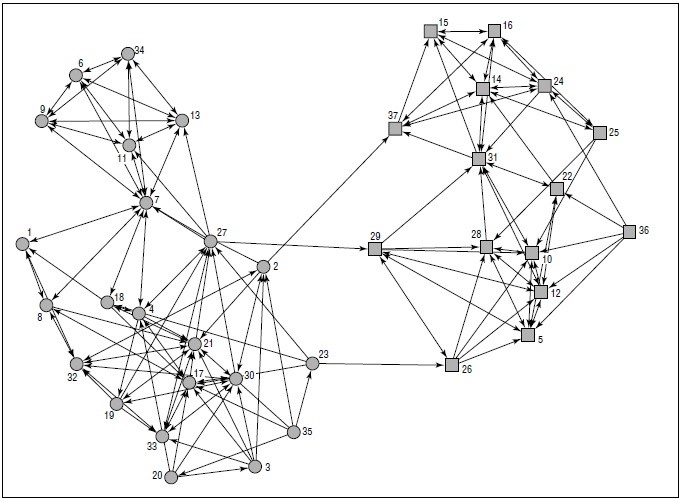 Individual network indicators include a person’s centrality, defined as: (1) how many choices they are given by others in the network; (2) how close they are to everyone else in the network (defined as the average number  of steps in the linkages to others); or (3) the degree to which they lie on paths connecting others in the network. Network analysis has developed over a dozen methods of identifying central nodes in a network. At the individual level, factors considered include, in addition to the ones mentioned  above, whether a person is a member of a group, whether their ties are reciprocated, and whether they span different groups. Factors measured at the group or network level include the density of the network (the number of ties as a percent of the number of possible ties), centralization (whether the ties are concentrated around one or a few members), and clustering (whether connections between two people imply a connection to a third).

A  significant finding  of  communication  network analysis is the importance of peer influence: An individual’s likelihood of engaging in a behavior increases with the percentage of their peers who engage in the behavior. At the same time, some researchers have discovered that individuals’ network thresholds—that is, the degree of peer influence needed to change their behavior—vary according to  their personal characteristics (Valente 1995).  In some cases, being integrated into a network puts one in a privileged position with regard to access to information, but in other settings it may be deleterious, for example by putting some at risk (Valente et al. 2005). Research has shown that so-called  opinion leaders serve as important filters and conduits for information  and its diffusion by influencing the adoption decisions of others. The influence of opinion  leaders may depend on group norms, however, as leaders adopt innovations early if the behavior is compatible with group norms. Denser and more centralized networks may accelerate diffusion by creating more and more efficient pathways for information to flow through, but may also hinder diffusion when the density is so great that it reduces the community’s access to outside information (Granovetter 1973).

Network analysis has been suggested as a methodology useful for measuring social  capital. Social capital is defined both as the social resources available to a person via their social contacts (Lin 2001), and as a perception by the community that a person is trustworthy and civically engaged (Putnam  1995).  Social network measures can provide a direct assessment of individual and communal social capital (Borgatti et al. 1998).

The tools and technology used to analyze communication networks have improved considerably in their ability to handle large datasets (such as the Internet). The field of network analysis continues to grow rapidly, aided in part  by the  International  Network  for Social Network Analysis (INSNA), which provides a Web site for access to more information.