This sample Contraception Research Paper is published for educational and informational purposes only. If you need help writing your assignment, please use our research paper writing service and buy a paper on any topic at affordable price. Also check our tips on how to write a research paper, see the lists of research paper topics, and browse research paper examples.

The Fourth World Conference on Women, held in Beijing in 1995, reinforced that all human beings have the right to “decide freely and responsibly the number and spacing and timing of their children and to have the information and means to do so, and the right to attain the highest standard of sexual and reproductive health” (para. 95). A discussion of contraception provides us with an understanding of how access to comprehensive family planning services can improve the lives of women, men, and children around the world.

Contraception, or birth control, is the deliberate prevention of conception by hormones, devices, surgery, or avoiding intercourse during a woman’s fertile time of the month. Family planning is the intentional decision on the number and spacing of children a couple will bear.

According to the World Health Organization (WHO), there are approximately 123 million women, mostly in developing countries, who are not using contraception. Some of the reasons include poor access to comprehensive services, inadequate information, male partner disapproval, and fears about side effects and safety. Religious beliefs and public policies also play an important role in methods that are available to couples in both developing and developed nations.

Humans have been using birth control from the earliest times. Ancient Islamic texts, Jewish writings, and Hindu sacred scriptures all mentioned that herbs could be used as temporary contraceptives. Modern religious stances vary according to their definition of the place of sex within marriage; for example, the Catholic Church prohibits any artificial means of birth control because it believes that the sole purpose of sexual intercourse is procreation. Some Christian fundamentalists, Evangelicals, and Anglicans share this view. Orthodox Judaism permits female contraceptives only for health reasons; while Conservative and Reform views leave the decision to the married couple, as does Christianity’s Eastern Orthodox Church. The Islamic faith has wide variations on attitudes toward birth control, but despite this, procreation is emphasized as religious duty. There is no prohibition to birth control in Hinduism. As noted by Kathleen O’Grady in her 1999 article “Contraception and Religion, a Short History,” the two common concerns of all major religions are fear of illicit sex and immorality, and destruction of the family. Particularly among non-Western religions, the worry is that liberal family planning policies could encourage Western modes of living, not only destroying the family, but family values as well. Some Christian fundamentalists in the United States agree with this stance. On the other hand, women’s rights activists argue that prohibiting birth control is a fundamental way to control women and keep them dependent on men.

National and international public policy also plays a role with respect to sponsoring or funding reproductive health services, and policies are modified with changes in national leadership. In the United States, for example, President George W. Bush instituted a global “gag” rule regarding abortion in 2001. This means that foreign agencies, such as the WHO, no longer receive funding if they counsel women about abortion, consequently affecting family planning programs as well.

History of Contraception and Current Methods

Despite religious decrees about contraception, there are many references that document three major methods that go as far back as ancient Greece: the use of herbal remedies as abortifacients, coitus interruptus (withdrawal of the penis from the vagina before ejaculation, hereafter referred to as withdrawal ), and abstinence. Condoms were described as protection against sexually transmitted infections (STIs) in the early sixteenth century. Rubber condoms became available in the United States in the nineteenth century along with cervical caps, diaphragms, metal pessaries, and male and female sterilization. The birth control pill revolutionized contraception with its debut in 1959. There have been many advances in hormonal and non-hormonal contraceptive technologies for women in the last thirty years. Although research is being conducted on systemic methods for men, condoms, withdrawal, and sterilization remain the only contraceptive options for them. See Table 1 for current methods. 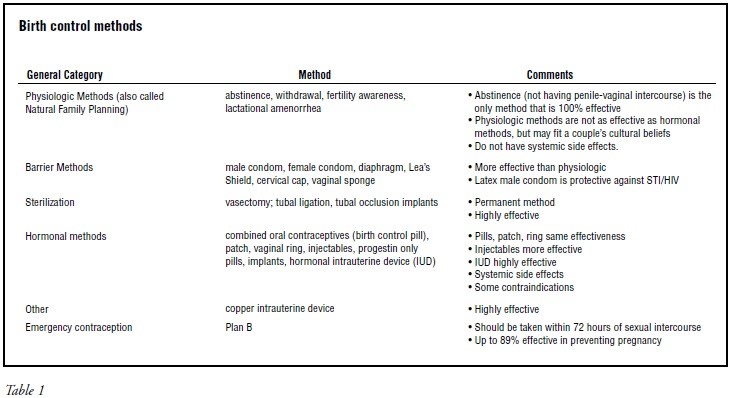 Male latex condoms, when used reliably and properly, are highly effective in preventing STIs and the human immunodeficiency virus (HIV). The female condom is the only female method that is effective in preventing pregnancy and STIs/HIV. People at risk for sexually transmitted infections (STIs) and/or HIV may be afforded dual protection against STI/HIV and pregnancy by using either male or female condoms. Using condoms and another form of birth control are even more effective measures of contraception.

The World Health Organization has taken the lead on providing resources for international family planning since its inception in 1948. Paul Van Look, director of the WHO Department of Reproductive Health and Research, has stated that sexual and reproductive health are concerns for everyone at all stages of life and are fundamental to the economic and social development of nations, but also mirror basic inequalities such as wealth and gender. Women have been particularly harmed by lack of access to reproductive health services; research documents that the ability to space pregnancies impacts a woman’s health and quality of life, as well as the health of her children. Family planning programs can also improve the economic and social situation of women’s lives.