This sample Extent Of Imprisonment: Global Research Paper is published for educational and informational purposes only. If you need help writing your assignment, please use our research paper writing service and buy a paper on any topic at affordable price. Also check our tips on how to write a research paper, see the lists of criminal justice research paper topics, and browse research paper examples.

The extent of imprisonment worldwide cannot be determined precisely, but a broad estimate can be achieved. The opportunity to compare the figures for individual countries provides the basis for assessing the need for policy changes. The first attempt at compiling a complete list of world prison populations was published in 1999; since then, information has been traced on the extent of imprisonment in almost all countries.

Female imprisonment constitutes between 2 and 9 % of the total prison population in most countries. Six of the seven highest levels (between 15 and 22 %) are in Asian prison systems. Overall, more than 625,000 women and girls are held in penal institutions throughout the world.

Pretrial/remand prisoners constitute the vast majority of the prison population in some countries and only a small minority in others. Nine of the 12 highest levels (over 70 %) are in Africa. In 16 countries, the level is below 10 %. It is likely that there are now more than three million in pretrial/remand imprisonment.

Foreign prisoners generally constitute less than 30 % of the prison population, but in six countries more than 70 % of prisoners are foreign nationals.

Overcrowding in the world’s prison systems is evidenced by the fact that the official capacity of the systems is exceeded in three fifths of the 196 countries on which information is available. In 23 countries, the occupancy level is more than twice the intended capacity.

Imprisonment may be defined as custodial confinement as a result of being suspected or convicted of one or more criminal offenses.

It is not possible to know precisely the extent of imprisonment worldwide, but a broad estimate can be achieved.

There are several reasons why the precise level cannot be known, including the following: (a) Some countries never reveal the number of people detained in prisons or other penal institutions as a result of being suspected or convicted of criminal offenses – e.g., the Democratic People’s Republic of Korea (North Korea), Eritrea, and Somalia.

(d) Some countries include in their prison population totals persons detained as illegal immigrants, even though they are not suspected or convicted of a criminal offense.

(e) People held in a form of custody that is not under the authority of the national prison administration are not usually included in national prison population totals.

(f) The information available as to the number of prisoners in each country does not relate to the same date.

Many of the above considerations do not generally have a large effect on the calculation of the extent of imprisonment worldwide. For example, in those countries where juveniles are held in custody in respect of a criminal offense but excluded from the published prison population total the number of such juveniles is generally not large, and the same is true of the number of persons held in psychiatric facilities as a result of criminal offenses.

It is (a) and (b) above that are the main obstacles to knowing the full extent of imprisonment worldwide. But by assuming that the prison population levels in the countries for which information is missing or incomplete are similar to the median figures for the subcontinental region in which they are situated, a broad estimate can be achieved.

The availability of information about the extent of imprisonment in the individual countries enables governments and prison administrations, and all those who have an interest in improving criminal justice, to compare the level of imprisonment in one country with that in another and to consider the reasons and justifications for the differences that are revealed. This provides the opportunity for the development of evidence-based policy changes.

Background Of The Data Collection

Many countries have for a long time been recording the number of prisoners in their own prisons and detention centers, although others have only started doing so quite recently, and it is believed that there are still a small number of countries that do not keep such records on a regular basis even now.

But efforts to assemble prison population totals in a large number of countries have been very few. The Howard League for Penal Reform assembled figures (in respect of a date between December 1932 and June 1936) for 54 countries in “The Prisoner Population of the World,” a document submitted to the League of Nations in August 1936.

The International Penal and Penitentiary Commission (now the International Penal and Penitentiary Federation) assembled figures (mostly in respect of 31 December 1936) for 55 countries, in response to a request by the League of Nations, in “Enquiry into the number of prisoners and measures taken to reduce it” a report submitted to the League of Nations in 1938.

In the 1970s, the United Nations commenced its series of surveys of “Crime Trends and the Operations of Criminal Justice Systems” which include a section that includes prison population data. These surveys (the most recent, the 12th, obtained data for 2009) generally receive prison data from 60 to 65 countries, about half of them in Europe.

In 1983, the Council of Europe commenced its annual series of prison statistics in its member states “Council of Europe Annual Penal Statistics” or, using its French language acronym, “SPACE” (Tournier 1983). Reflecting the increasing membership of the Council, the number of countries for which prison population data was received has grown from 19 in 1983 to 31 in 2000 and 47 (52 prison systems) in the most recent (2010) edition (Aebi and Delgrande 2012).

The first attempt at producing a complete list showing the number of prisoners in each of the world’s countries was compiled in 1998 and published by the British Home Office (Walmsley 1999, 2001). Containing data for 180 countries, it acknowledged the limitations described in the above introduction and drew attention to the desirability of improving the reliability and comprehensiveness of the data and of including information on the proportion of females and of pretrial detainees in penal institutions and on occupancy levels.

The World Prison Population List has now reached its ninth edition (Walmsley 2011), which contains figures for 218 countries. From 2000, it has been complemented by the online World Prison Brief, which has substantially developed the information available on the extent of each country’s imprisonment level along the lines indicated above, including the proportion of foreign prisoners, information on trends and lists ranking countries from the highest to the lowest on prison population data variables.

Figure 1 displays the number of prisoners relative to 100,000 population (the prison population rate) in 221 countries. The figures range from below 20 to 730.

Figure 2 demonstrates the variation between different regions in Europe.

Nordic countries as a region have the lowest level of prisoners in Europe (with Slovenia and Switzerland on the same level). The Nordic figures vary from 47 to 74. The corresponding figures for Western European countries are 64–104, Southern Europe 108–168, Britain and Ireland 97–154, Central and Eastern Europe 146–221, Baltic countries 252–314, and countries of former Soviet Eastern Europe 338–514 (for explanations of differences, Lappi-Sepp€al€a 2008, 2013). 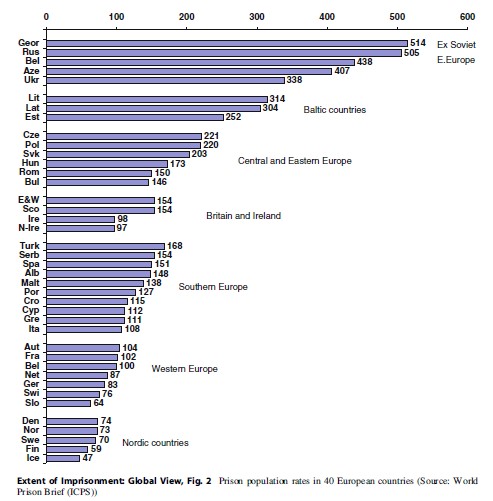 Figure 3 displays percentage changes in prison population rates from 1992 to 2012 in around 100 nations for which data is available. 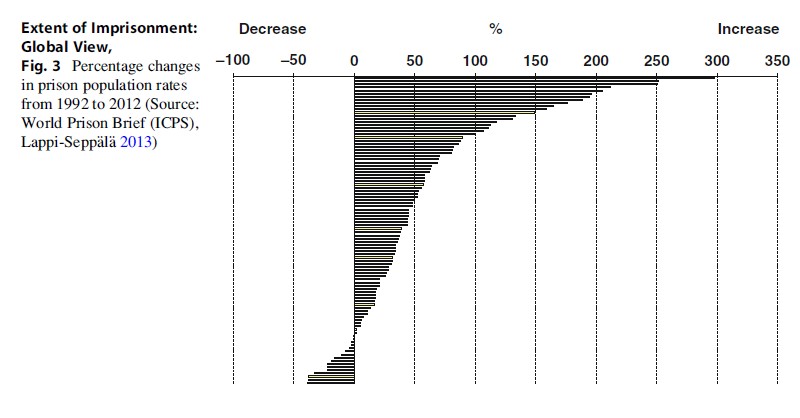 There are continental variations in the prevalence of women and girls within the total prison population. The median level is 4.45 %, but in African countries, female prisoners constitute a much smaller percentage of the total (the median is 3.1 %) than in Asia where the median is almost twice as high (5.95 %). The median levels in the Americas, Europe, and Oceania are 5.15 %, 4.9 %, and 3.9 %, respectively (ibidem).

In 2007, two and a quarter million persons were known to be held in pretrial and other forms of remand imprisonment, and it was estimated that a further quarter of a million were so held in countries on which such information was not available (Walmsley 2008). The subsequent increase in the total prison population would suggest that there are now at least three million in pretrial/remand imprisonment.

Foreign prisoners constitute less than 30 % of the prison population in most countries, but more than half the prison population are foreign nationals in 15 countries and in six of these foreign nationals make up more than 70 % of prisoners – United Arab Emirates and Monaco (both 92 %), Qatar (73 %), Saudi Arabia (72 %), and Liechtenstein and Switzerland (both 71 %) (World Prison Brief, accessed 10.8.12). 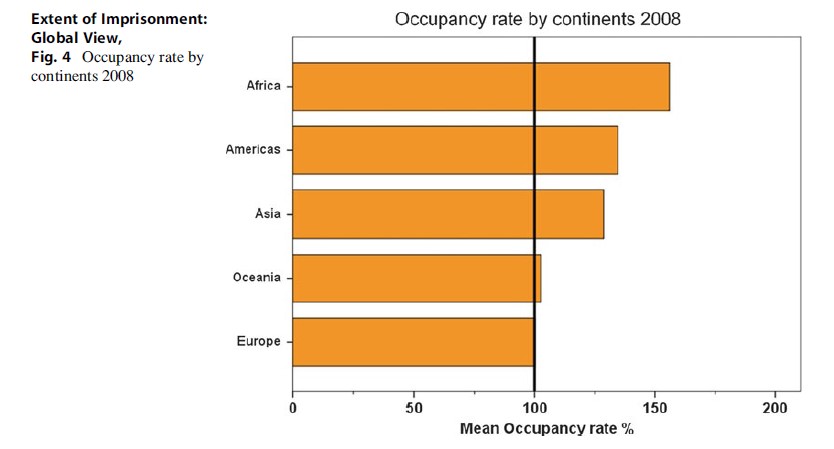 High levels of imprisonment are invariably accompanied by overcrowding. If a country has a prison population that exceeds its official capacity (i.e., has an occupancy rate in excess of 100 %) it can safely be assumed that there is overcrowding and the higher the rate the more likely that the overcrowding is of a serious nature.

Figure 4 shows the continental variations in occupancy levels in 2008.

Overcrowding is even worse than these figures suggest. This is because the official capacity of institutions is set in many countries at a level that provides prisoners with less space than international human rights bodies consider adequate. Furthermore, even in a prison system that is not overcrowded when taken as a whole, there are often individual prisons that are overcrowded – and sometimes severely overcrowded.