This sample Digital Divide Research Paper is published for educational and informational purposes only. If you need help writing your assignment, please use our research paper writing service and buy a paper on any topic at affordable price. Also check our tips on how to write a research paper, see the lists of research paper topics, and browse research paper examples.

The digital divide has been conceived as the lack of access to information and communication technologies among underrepresented ethnic minorities, those of lower socioeconomic levels, and people living in rural locales. Several studies have characterized these disparities along dimensions of gender (Kvasny 2003), age (Loges and Jung 2001), race (Hoffman 1999, Kvasny 2003, Payton 2001), geographical location (Sipior et al. 2004), and educational resource characteristics (NTIA 2000, Payton 2001, Kvasny and Payton 2005). Karen Mossberger and Caroline Tolbert (2003) have found that African Americans are less likely to have access to information and communication technologies and the skills to use such technologies, even when controlling for other factors, such as income and education. Similar findings have been documented for Hispanic and Native Americans. Despite these foundations of physical access, the digital divide concept is not limited to a binary taxonomy of access versus nonaccess, or the typical classification of “have” and “have not.” In fact, the digital divide warrants a broader definition—one that is inclusive of social, economic, and technology-use attributes—which can capture the notion of digital equity. This concept rests on critical issues of how individuals can use information provided by these technologies and what strategic skills are desirable to prosper in the competitive environment of today’s global information age.

What is Digital Equity?

Digital equity raises issues of social justice and can be defined as a trend toward equal access to information and communication technologies among society’s citizens. Even more, digital equity enables individuals to gain knowledge and skills to use technological tools, computers, and the Internet (i.e., behavioral outcomes). The National Institute for Community Innovations reports that:

According to recent research by the National Center for Educational Statistics, 98% of schools and 77% of instructional rooms have computers and are connected to the Internet. But many classrooms and important educational projects are not connected, and these educators are deprived of excellent Internet-based resources. Most important, even though a school or classroom may be connected, the technology may not [be] used by students—leaving many young people technology-illiterate, without key skills they need to succeed in today’s job market. (National Institute for Community Innovations 2005)

Similarly, Austan Goolsbee and Jonathan Guryan reported that California’s public schools were funded by nearly $937 million for a program known as E-Rate (education rate) during the 1998 to 2000 school years, of which a substantial portion provided Internet access and technologies. This program noticeably closed the digital divide for Internet access between wealthy and poor California schools. If one assesses effectiveness in terms of access, the California E-Rate initiative has been successful. Goolsbee and Guryan note, however, that despite this accomplishment, Internet access did little in the way of improving student performance; they conclude that “the Internet itself … seems unlikely to be a silver bullet for solving the problems of America’s public schools” (2006, p. 65).

In its 2003 fiscal budget, the administration of President George W. Bush reduced funding for community-based technology-related programs and training initiatives by $100 million, as shown in Figure 1. 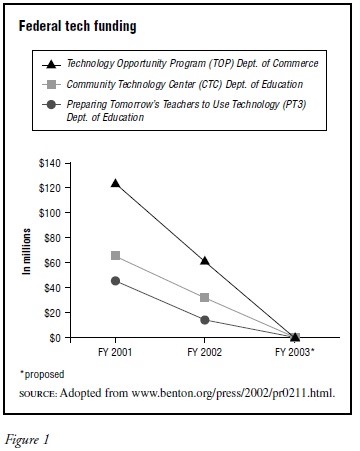 Much of this funding previously supported underrepresented minorities, children, and rural programs. While the digital divide is an immediate and direct effect of the eradication of these training initiatives, the more dire consequences rest in the lack of social justice produced by such digital inequities. Evidence of these outcomes has been documented by the National Telecommunications and Information Administration (NTIA) report “A Nation Online: How Americans Are Expanding Their Use of the Internet” (2002). The NTIA reports that individuals benefit from being prepared with technology skills, and 57 percent of employed Americans over the age of twenty-five use a computer in the workplace. By 2010 jobs in science, technology, engineering, and mathematics are expected to increase by 67 percent according to the U.S. Department of Labor as reported in the 2002 CyberEducation Report by the American Electronics Association. In addition, the costs associated with broadband access to the Internet heighten digital exclusion and often preclude minority, low-income, rural, and undereducated populations from access to the social justice associated with social, community, economic, and education capital foundations.

Unlike other forms of communication media (e.g., radio, television, and printed materials), the Internet is distinctive because of its integration among diverse communication modalities, such as broadcasting, reciprocal interaction, group discussion, person-machine interaction, and reference research (DiMaggio et al. 2001). The digital equity principle examines how Internet access is used, and evidence supports the argument that parity is achievable when all populations gain the knowledge and skills to impact social inclusion—thereby stimulating social justice. The most noteworthy form of inclusion would necessitate equalities (therefore reducing or eliminating disparities) in education, health care, and economic and financial systems.

The digital divide or inequity issue is not limited to the United States. According to statistics from the World Summit on the Information Society, a comparison of Internet access and use in eight industrialized nations (Canada, France, Germany, Italy, Japan, Russia, the United Kingdom, and the United States) compared to the rest of the world indicates that: (1) In 2004 fewer than three out of every one hundred Africans used the Internet, compared with an average of one out of every two inhabitants of the industrialized countries; (2) the eight industrialized countries are home to just 15 percent of the world’s population but almost 50 percent of the world’s total Internet users; and (3) there are more than eight times as many Internet users in the United States than on the entire African continent. Sundeep Sahay and Chrisanthi Avgerou concluded that information and communication technologies are key to the development of poorer nations and offer the “potential for turning around uncompetitive industries and dysfunctional public administration, and for providing unprecedented opportunities for the information-intensive social services, such as health and education” (2002, p. 73).