This sample Environmental Kuznets Curves Research Paper is published for educational and informational purposes only. If you need help writing your assignment, please use our research paper writing service and buy a paper on any topic at affordable price. Also check our tips on how to write a research paper, see the lists of research paper topics, and browse research paper examples.

Casual observation suggests that cities in newly industrialized countries such as Bangkok, Beijing, Calcutta, and Mexico City are more polluted today than they were twenty to thirty years ago, while cities in older industrial countries such as New York, Tokyo, and London are cleaner than they were twenty to thirty years ago. This apparent paradox raises the question of whether higher income levels result in a better or worse environment. The environmental Kuznets curve (EKC) hypothesis proposes that there is an inverted U-shaped relationship between various indicators of environmental degradation and income per capita. This became known as the environmental Kuznets curve because of its similarity with the shape of the income-inequality relationship discovered earlier by Russian-American economist Simon Kuznets.

The EKC and Environmental Degradation

This relationship was discovered by Gene Grossman and Alan Kreuger in the early 1990s. They found that at low levels of per-capita income, concentrations of sulphurdioxide, suspended particulate matter, and water pollutants increase as income increases. However, once per-capita income reaches a particular threshold, concentrations of these pollutants decrease as income continues to rise.

The emissions studied by Grossman and Kreuger have local or own-country pollution effects and relatively low abatement costs. Global pollutants such as greenhouse gases represent a second important type of environmental degradation. A 1995 study by Douglas Holtz-Eakin and Thomas Selden examined emissions of carbon dioxide, which is a global pollutant. Their analysis reveals that the emissions continue to rise with income, a finding that is not consistent with the EKC.

Deforestation is a third important type of environmental degradation. Economic development is generally expected to reduce a nation’s agricultural sector and increase its industrial sector. Such development is also associated with the use of modern agricultural technology, which reduces land requirements. Logging and the demand for wood as an energy source is likely to grow as a country develops, but this demand may wane as industrialization takes over. 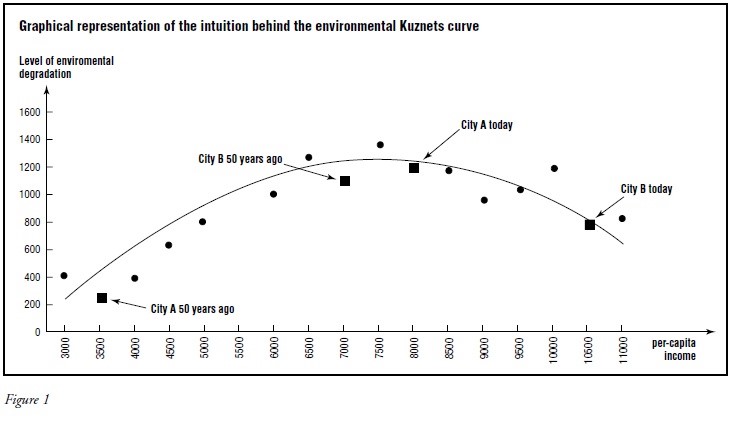 Having looked at three varieties of environmental degradation, it is necessary to recognize that the environmental quality is the outcome of the interplay of emissions and abatement (or depletion and regeneration in the case of renewable resources). The income-environment relationship captured by simple regression exercises cannot distinguish between the demand side and supply side forces that drive this relation. Income acts as a surrogate for a variety of underlying influences. Grossman and Kreuger provide an intuitive explanation of these influences, as outlined below.

The Scale of the Economic Activity

A larger scale of economic activity per unit of area, all else being equal, results in increased levels of resource use and waste generation. Here, income acts as an indicator of economic activity, encouraging a positive relation between environmental degradation and income.

The Composition of the Economic Activity

Different sectors of the economy have differential pollution and resource use intensities. Industry, especially manufacturing, tends to be more pollution intensive than either agriculture or services. The share of industry in a nation’s gross domestic product (GDP) first rises with economic growth and then declines as the country moves from the preindustrial to the postindustrial stage of development. This influence encourages an inverted U-shaped relationship between environmental pollution and income level.

At low income levels, people are more concerned with their food and other material needs and less concerned with environmental quality. At higher income levels, people begin to demand higher levels of environmental quality to go with their increased prosperity. On the supply side, low incomes mean that countries and individuals cannot afford much expenditure on pollution abatement, even if the demand were there. Economic growth not only creates the demand for improved environmental quality, it also makes resources available to supply it, resulting in cleaner technologies. Stripped of the scale and composition effects, the technique effect predicts that environmental degradation would decline as per capita income increases.

The sum of all these effects defines the observed income-environment relationship. For example, in the case of global pollutants, the technique effect is weak because a disciplining of domestic production would not benefit domestic consumers, who therefore do not demand cleaner techniques of production. For economies that experience growth later than the developed economies, it is possible that they will continue to produce industrial goods not only for their own use, but also for their trading partners. In these economies, the composition effect that is relevant for developed nations that have moved beyond the industrial phase does not apply. This reduces the possibility of a decrease in environmental degradation at higher incomes. Hence, more than the actual shape of the EKC, it is the lessons learned from analyzing it that are important in understanding the relation between per capita income and environmental degradation.