This sample Equality Research Paper is published for educational and informational purposes only. If you need help writing your assignment, please use our research paper writing service and buy a paper on any topic at affordable price. Also check our tips on how to write a research paper, see the lists of research paper topics, and browse research paper examples.

Equality is a highly complex concept, there being as many forms of equality as there are ways of comparing the conditions of human existence. Equality can refer to numerous features of human life, which is why the term is usually preceded by an adjective that specifies which one is captured, such as social equality, legal equality, political equality, formal equality, or racial equality, to mention but a few. This entry will focus on the more important variants.

The Struggle for Equality

There is, firstly, political or legal equality, which is concerned with the right to vote, to stand for office, and to be treated equally before the law, irrespective of gender, race, religion, age, disability, social background, or other such features. In medieval times, rulers took it for granted that hierarchy is natural or inevitable and that a few are entitled to privileges denied to the many. One of the achievements of the Enlightenment in the eighteenth century was the acknowledgement that all human beings have equal moral worth by virtue of a shared human essence. The Declaration of Independence (“All men are created equal”) and the Declaration of the Rights of Man and Citizen (“Men are born and remain free and equal in rights”) enshrined this principle in the national constitutions of the United States and France, respectively.

Numerous privileges of rank and order that had survived from feudal times were abolished in the following centuries: Slavery was done away with, universal suffrage was introduced, public offices were opened up to competition, and racial segregation was replaced with racial integration. Not everyone has been content with these achievements, however, and many today demand further changes, particularly with regard to race relations, gender equality in the workplace, and the rights of the disabled.

While the struggles over legal and political equality continue, the academic discourse in the social sciences has been concerned more with another type of equality, namely, that of substantive equality.

Political thinkers started to question the worth of the principle of political or legal equality, given that, if left on its own, it merely grants each person an equal right to eat in an expensive restaurant—in the sense that no one is excluded on the grounds of race, gender, or religion—but entirely fails to address individuals’ capacity to exercise that right, that is, their money. If wealth or some other measure of welfare is a prerequisite for exercising rights to equal treatment in other spheres, the question arises as to how social goods should be distributed. Once this normative issue is settled within political philosophy, the related practical question in public policy becomes imminent as to whether, how, and to what extent liberal democracies should ensure a level of substantive equality.

While many issues surrounding this question remain contentious, others are now regarded as relatively uncontroversial. Figure 1 depicts some of the more important debates carried out in political philosophy in recent decades. Once substantive equality is agreed upon as an aim worth pursuing, it is necessary to specify if equality is seen as an instrumental or intrinsic ideal. A wide consensus in favor of the latter has emerged, which states that equality is a good thing because of its implications for values other than equality itself, such as greater individual choice, personal autonomy, or the capacity to exercise rights. Hence, the desirability of a more equal distribution is due, not to the fact that it is more equal but that it is expected to promote that other value. Inequality can therefore be acceptable, provided a so-called Pareto improvement is achieved so that at least one person has been made better off without making anyone else worse off.

On the next level, the concept of equality requires a further distinction between individual features that result from voluntary choices and those that are a product of social and natural circumstances. The majority of egalitarian philosophers claim that it is unfair if, to employ a term coined by John Rawls (1921–2002), “morally arbitrary factors” differentially influence the course of people’s lives, and that redistribution is justified as a way of neutralizing them (1971). The fundamental aim of equality should be to compensate people for undeserved bad luck, for aspects of their situations for which they are not responsible. As Ronald Dworkin states (2000), there is a moral warrant to level the inequalities in the distribution of social goods that are generated by differing endowments, while leaving intact those inequalities generated by differential effort, planning, and risk taking. No one deserves their genetic endowments or other accidents of birth, such as who their parents are and where they were born. The advantages that flow from those blessed with such fortunes must not be retained exclusively by them. 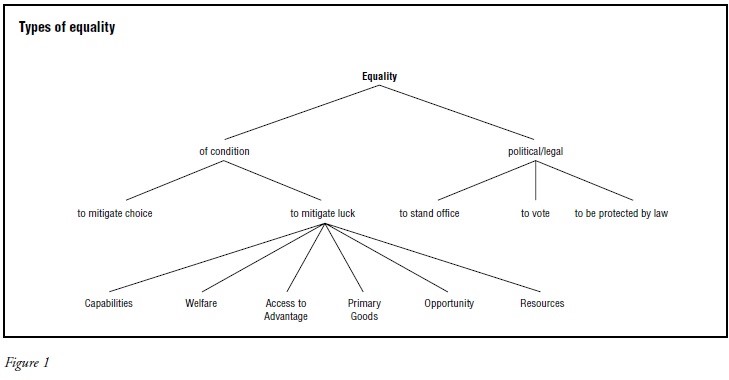 This is the stage where the traces of consensus in political philosophy end, as much work in the discipline has been dedicated unsuccessfully to the subsequent question as to what it is that is to be equalized. The aim has been to establish the appropriate standard of interpersonal comparison, or “currency” of egalitarian justice. Several suggestions have been made. Rawls proposes what he calls “primary goods”: income, wealth, opportunity, and the bases of self respect. Nobel laureate Armatya Sen concentrates on “capabilities” to choose between various “functionings” that a person is able to realize in his or her life. Further accounts are G. A. Cohen’s “access to advantage” and Dworkin’s “resources.”

The diversity of these proposals shows how difficult it is to assess the features of an individual’s conditions that are to be rendered equal: They all have different causes and require compensation in a different way. Should we follow proposals that ensure an equal end-state outcome? Or should we guarantee equality achieved at some initial point in time, irrespective of what level of equality is achieved thereafter?

While the debate in political philosophy is ongoing, substantive equality is a more imminent concern for political practice, where policymakers in liberal democracies face pressures from their electorates if they fail to take measures that ensure equal life prospects to some degree.

Historically, the welfare state has been the vehicle through which governments have sought to address the problem. Social and economic security has been provided to the state’s population by means of pensions, social security benefits, free health care, and so forth. However, increasing pressures of globalization toward the end of the twentieth century compelled welfare states to subject their public expenditures to much more stringent economic scrutiny. Public spending and taxes were cut and responsibility for welfare was reassigned from the state to the individual. States have done so to varying degrees, however, and the measurable levels of equality today differ markedly as a result.

When complex social phenomena are condensed into a single measure, criticism is bound to arise. Even so, the most common statistical index in the social sciences to measure substantive equality within a society is the socalled Gini-coefficient, named after the Italian statistician Corrado Gini (1884–1965). The Gini-coefficient (Figure 2) varies between the limits of 0 (perfect equality) and 1 (perfect inequality) and is best captured visually with the help of a diagram that measures the percentage share of the population on the x axis and the percentage income distribution on the y axis. The coefficient represents the geometrical divergence of the so-called Lorenz curve, which measures the actual percentage income distribution, from a line with a 45-degree angle, which represents perfect equality, in the sense that everyone is equally wealthy. The closer the Lorenz curve is to the diagonal line, the smaller the shaded area beneath that line, and the smaller the resultant Gini-coefficient, the more equal is the society’s income distribution. 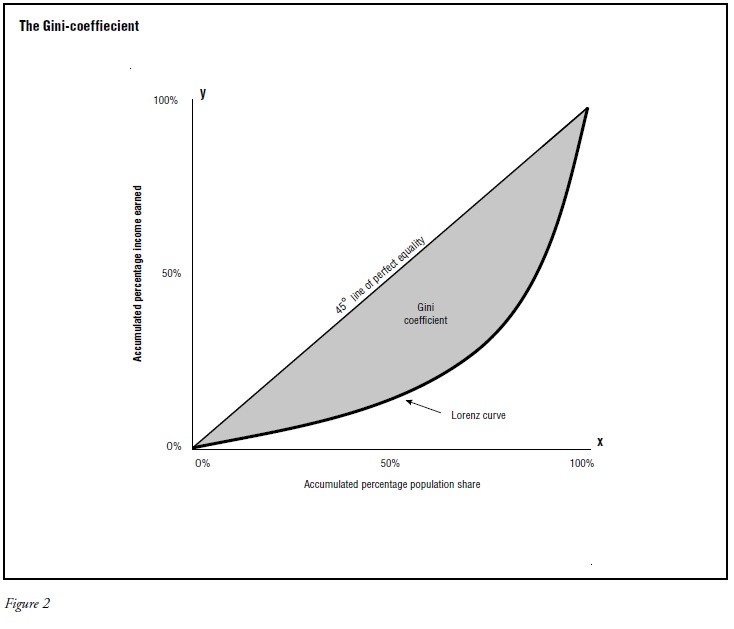 During the 1980s and 1990s, some advanced industrial nations experienced significant shifts in this coefficient, most notably the United Kingdom and the United States, where the neoliberal economic policies introduced by the governments of the day brought about notable increases in income inequality. As statistics produced by the United Nations show (UNDP 2005), in the United Kingdom the Gini-coefficient rose from 0.25 in 1979 to 0.35 in 2000, while the United States saw an increase from 0.36 to 0.43 over the same period. By comparison, countries with more extensive welfare state arrangements, such as most Scandinavian countries, have experienced only minor changes and continue to record Gini-coefficients of between 0.24 and 0.26. On the other end of the spectrum, states such as Brazil, Mexico, and, increasingly, China report the highest income inequality, with coefficients of between 0.47 and 0.60.