This sample Gifted and Talented Research Paper is published for educational and informational purposes only. If you need help writing your assignment, please use our research paper writing service and buy a paper on any topic at affordable price. Also check our tips on how to write a research paper, see the lists of research paper topics, and browse research paper examples.

Federal-level initiatives provide guidance for local and state gifted program policies and practice. The 1993 National Excellence Report provided a foundation upon which advocates of gifted education can be proactive in defining giftedness and identifying and serving gifted students. According to the report:

Children and youth with outstanding talent perform or show the potential for performing at remarkably high levels of accomplishment when compared with others of their age, experience, or environment. These children and youth exhibit high performance capability in intellectual, creative, and/or artistic areas, possess an unusual leadership capacity, or excel in specific academic fields. They require services or activities not ordinarily provided by the schools. Outstanding talents are present in children and youth from all cultural groups, across all economic strata, and in all areas of human endeavor. (USDE 1993, p. 27)

This definition may be the most culturally sensitive federal definition to date, with its focus on talent, potential, and comparisons of students of the same age who come from similar backgrounds and experiences. It also boldly states that giftedness exists in all groups, and that no group should have a monopoly on being identified and served.

In addition to developing this new definition of gifted, the Jacob K. Javits Gifted and Talented Students Education Program, enacted in 1988, supports demonstration grants, a national research center, and national leadership activities designed to focus attention on the needs of students with demonstrated or potential talent. It is now clear that conventional views of giftedness and traditional ways of identifying giftedness (e.g., using single IQ scores or standardized achievement tests) often create barriers for culturally and linguistically diverse and lowincome students to gain access to gifted programs. Thus, the Javits Program is also important because priority funding is given to efforts to serve gifted and talented students who are economically disadvantaged, speak limited English, or have disabilities.

Gifted education has encountered much criticism due to a legacy of racial inequality in the United States that has often been tantamount to de facto segregation. Throughout its history, gifted education has not been truly desegregated. Rather, Hispanic American, American Indian, and African American students remain underrepresented by large percentages (see Table 1).

This historical problem is rooted in the deficit views of culturally diverse groups, as well as in the overreliance on intelligence tests as the single or primary means of selection. For example, in the early 1900s, many researchers who examined intelligence among students held the belief that culturally diverse children, particularly African American children, were innately inferior to white children (see Figure 1). In addition, many scholars maintained that poor children, regardless of race, were also intellectually inferior to white students from middle- and upper-income families. While scholars vehemently refuted the biased views that resulted from the use (or abuse) of intelligence tests, intelligence quotient (IQ) scores on standardized tests were used to reinforce and distort beliefs about the intellectual capacity of white children, and to perpetuate their superiority and worth within society.

The emergence of gifted education coincided with the end of the “separate but equal” doctrine, which was validated by the U.S. Supreme Court in Plessy v. Ferguson in 1856. This decision made it legal for white and black children to be educated in separate schools. As a result, white children generally went to schools of higher quality than black and other culturally diverse children. White children were believed to be innately higher in their capacity for academic achievement and educational attainment. They were also perceived to be smarter, more motivated, and more creative, and therefore more deserving of instructional services and facilities than black children, who, “by nature,” required less access to or need for quality educational opportunity or instruction. Genes were considered to be the main determinant of destiny, while the environment—including education—was deemed to be of little significance for blacks (see Herrnstein and Murray 1994).

Today, some scholars continue to criticize gifted education because it is viewed as serving a racist or elitist agenda seeped in educational politics (see Sapon-Shevin 1993; Wells and Serna 1996). More than any other educational program in public schools, gifted education faces the ongoing struggle to desegregate its programs. As of 2002, for example, black students were underrepresented by 60 percent in gifted programs nationally. Essentially, segregation, as it existed almost two centuries ago, seems to still be evident in gifted education. 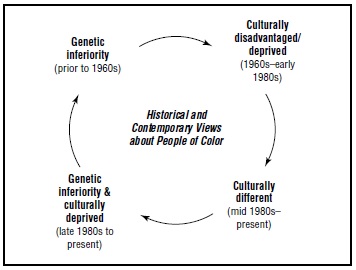 Essentially, while the Brown v. Board of Education court decision in 1954 ended legalized segregation in public schools, the politics of education made way for a new form of segregation through gifted education. Cloaked behind the guise of valiant goals—such as meeting the needs of talented youth and preparing the next generation to be competitive in global markets—gifted education programs have primarily provided services to white students from middle- and upper-income families. Indeed, the concept of the “gifted child” remains synonymous with white middle-class children in the minds of too many public school educators and parents. In many ways, the advent of gifted education pleased white parents who were angry at the social and political changes occurring in the educational landscape that mandated schools to integrate, and not only were white parents infuriated by their children being forced to learn with “inferior” and “disadvantaged” black children, they also opposed white children being educated by black teachers.

Gifted education is based on the general premise that students with a high level of intellectual ability, or who excel in specific academic areas, need special instructional services to achieve their full potential. In essence, special instructional services (e.g., accelerated classes, enrichment programs, advanced academic experiences) for students with outstanding talent are essential to meet the gifted student’s needs, just as special education services (e.g., remedial reading or tutoring) are essential for meeting the needs of students with learning disabilities. However, because of the historical racial inequity in programs for gifted students, gifted education still lacks essential support because it is seen as a modern form of promoting separate and unequal education. For example, the field of gifted education is plagued by the reality that standardized IQ testing, which was the primary tool that researchers used to perpetuate the inferiority of blacks and the superiority of whites, is still the primary method by which black and other diverse students are kept out of gifted programs.

Why do some want to keep gifted education segregated? Gifted students often receive the best instructional resources, the most effective or qualified teachers, and the lowest student-teacher ratios, all of which are critical to a quality education. Therefore, some parents may not want their children to remain in general education; they may aggressively push to have their children in gifted programs, even if they do not meet criteria. Further, some administrators may resist admitting more diverse students into gifted education classes if parents and community members are resistant to diversifying gifted (and advanced placement) classes, as has been found in several court cases investigated by the Office for Civil Rights.