This sample The Burden of Mortality of Smoking Research Paper is published for educational and informational purposes only. If you need help writing your assignment, please use our research paper writing service and buy a paper on any topic at affordable price. Also check our tips on how to write a research paper, see the lists of health research paper topics, and browse research paper examples.

Tobacco is cultivated in many regions of the world and can be legally purchased in all countries. The dried leaves of the plant Nicotiana tabacum are used for smoking, chewing, or snuff. Smoking has been one of the most extensively studied human health risks with detailed epidemiological research dating back to the 1930s (see Table 1 in Doll, 1986 for a summary of early studies). This research has helped establish tobacco smoking as causally associated with substantially increased risk of premature mortality from several medical causes (Doll et al., 2004; Peto et al., 1992; Thun et al., 2000; U.S. Department of Health and Human Services, 1989, 2004; Zaridze and Peto, 1986). Added to the evidence from developed nations are a number of recent studies from developing countries such as China and India (Gajalakshmi et al., 2003; Liu et al., 1998). The focus on the developing world is important because smoking has increased in most developing countries over the last quarter of the twentieth century, with an estimated 930 million of the world’s estimated 1.1 billion smokers currently living in the developing world ( Jha et al., 2002; World Health Organization [WHO], 1997). Estimating the number of deaths caused by smoking in a consistent and comparable manner helps strengthen the scientific evidence for developing and evaluating national and global tobacco control because they demonstrate the total health effects of this exposure, and the total public health benefits of tobacco control. This research paper presents comparable estimates for number of deaths caused by smoking in the major regions of the world. A number of completed and ongoing studies have focused on national, and more recently subnational, estimates. 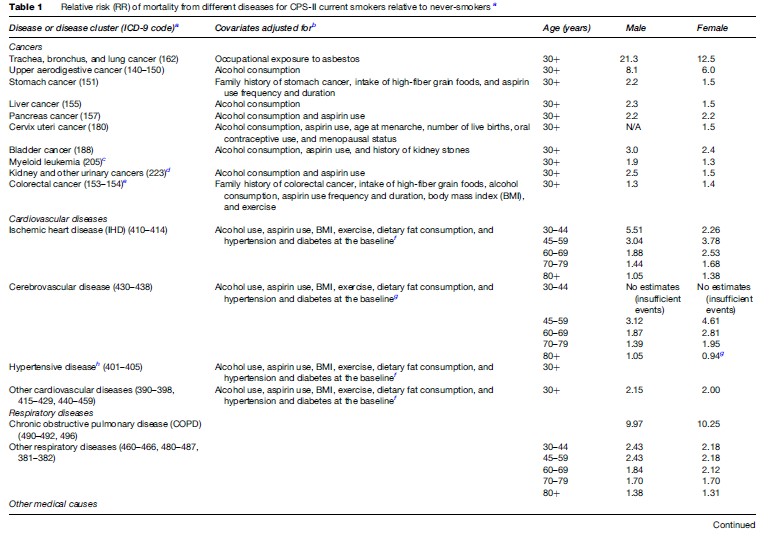 Quantifying The Health Effects Of Smoking

The accumulated hazards of smoking depend on factors such as the age at which smoking began or stopped, duration of smoking, number of cigarettes smoked per day, whether the smoked tobacco product was in the form of cigarettes or in other forms such as cigars (bidis), cigarette characteristics, and smoking behavior such as degree of inhalation (Peto, 1986). Many of these factors vary over time because of changes in the socioeconomic determinants of smoking including income, tobacco control programs such as taxation and ant advertising laws, and cultural norms. Therefore, current smoking prevalence or tobacco consumption alone would be insufficient indicators of the accumulated hazards of smoking, even if detailed data were available in all countries. This is important in low and middle-income countries, where smoking has increased over the past few decades, as well as in those high-income nations where smoking has declined ( Jha et al., 2002; WHO, 1997).

CLC Age-sex specific lung cancer mortality rate for 2001 for each country, from the Global Burden of Disease (GBD) database.

Conceptually, by using excess lung cancer mortality as the indicator of the accumulated hazards of smoking in both the study and reference populations, the SIR converts the smokers in the study population – who may have different smoking histories – into equivalent smokers in the reference population in which hazards for other diseases (e.g., different cardiovascular diseases) have been measured (Peto et al., 1992).

We used the American Cancer Society Cancer Prevention Study II (CPS-II) as the reference population (SL*C and NL*C ). CPS-II is one of the few studies of smoking and cause-specific mortality that captures the full effects of the smoking epidemic, because it was conducted among people who had been lifelong smokers. Most of the CPS-II current smokers were lifelong cigarette smokers with a mean consumption of about 20 cigarettes per day (Peto et al., 1992). The SIR was calculated for each age group and sex and for individual countries, and then averaged (population-weighted) in different world regions. The regions used for this analysis were the World Bank regions; the list of countries in each region is provided elsewhere (Lopez et al., 2006). Data on lung cancer mortality by county (CLC) were from the GBD databases for the year 2001, with methods and sources described in detail elsewhere (Lopez et al., 2006).

In applying the method to developing countries, we accounted for the important role of coal – a common fuel used in parts of the developing world – as a determinant of lung cancer among never-smokers. For those populations who use coal in poorly vented stoves (e.g., China and parts of South East Asia), never-smoker lung cancer mortality rates (NLC) were estimated based on data on lung cancer mortality among Chinese nonsmokers and prevalence of coal use in poorly vented stoves. The remaining risk factors for lung cancer mortality (ambient air pollution, occupational hazards, indoor air pollution from radon or biomass smoke, etc.) in various combinations affect a subset of the population of each country. Therefore the net impact of these risks on the relative levels of lung cancer among never-smokers in different countries is uncertain.

For each age, sex, and disease, the fraction of deaths attributable to smoking was estimated using the standard population attributable fraction (PAF) relationship with prevalence, P, set to the SIR for each age-sex group and RR, from Table 1.

PAFs were applied to regional disease-specific mortality statistics from the GBD databases to estimate cause-specific deaths attributable to smoking in 14 epidemiological subregions of the world.

We used data from the CPS-II to estimate the hazards (RRs) for mortality from different diseases caused by smoking, including adjustment for important covariates (see Table 1). The CPS-II is a prospective study of mortality in 1.2 million Americans aged 30 and older who completed a questionnaire on tobacco and alcohol use, diet, and other multiple risk factors in 1982, with the latest published follow-up for 1998. A complete description of the CPS-II study design is detailed elsewhere (Burns et al., 1997; Garfinkel, 1985; Thun et al., 2000). In 1992, when the first six-year (1982–88) results were obtained, mortality follow-up was virtually complete for the first two years, and about 98–99% complete for the next four (Peto et al., 1992). Analyses of smoking hazards in CPS-II were based on the first six years of follow-up (1982–88) to maximize the number of deaths available for analysis, especially in never-smokers, while minimizing misclassification of exposure due to cessation of smoking during follow-up (Burns et al., 1997; Thun et al., 2000). The analyses for stomach and colorectal cancers were based on the 1998 follow-up to increase the number of deaths (Chao et al., 2001, 2002). This may have resulted in an underestimation of hazard if some baseline current smokers quit smoking during follow-up. The RRs for mortality from different diseases among the CPS-II current smokers, relative to never-smokers, are shown in Table 1.

In the year 2001, an estimated 4.8 million deaths in the world were attributable to tobacco smoking (Table 2), accounting for 9% of all worldwide deaths. Seventy percent of these deaths were in low and middle-income countries. Three-quarters (76%) of the 4.8 million tobacco attributable deaths were among men (81% in lowand middle-income and 64% in high-income countries). 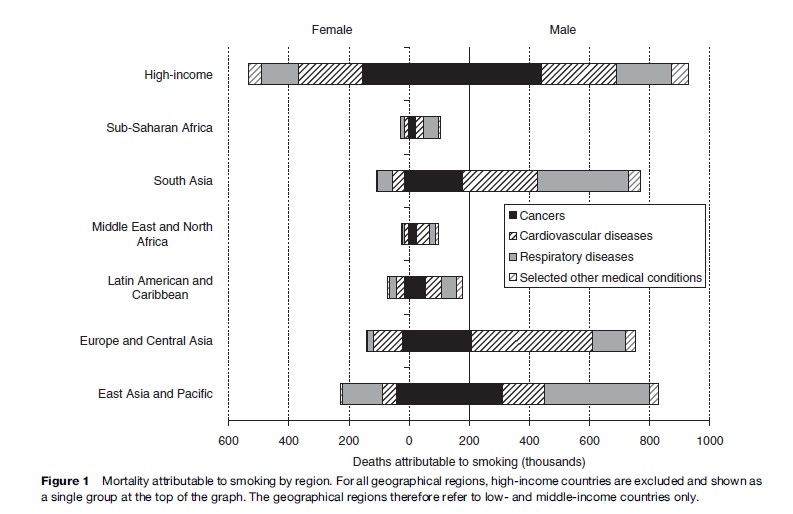 Among low and middle-income countries, deaths attributable to smoking were largest in East Asia and the Pacific and in South Asia, two regions with large populations. Europe and Central Asia also had large mortality attributable to smoking. Population is smaller in the low and middle-income countries of Europe and Central Asia but this region had high PAF and high background mortality from diseases affected by smoking, especially cardiovascular diseases; in this region 16% of all deaths (25% of all male deaths and 5% of all female deaths) were attributable to smoking. Proportional effects of smoking were smallest in sub-Saharan Africa, with a combined male-female PAF of 1%.

The contributions of different diseases to smoking attributable mortality also varied by region (see Figure 1), with cancers having a particularly important role in high-income countries, cardiovascular diseases in Europe and Central Asia and South Asia, and respiratory diseases in East Asia and the Pacific and in South Asia. This variation is because the absolute effects of smoking on a disease depend on smoking level, as well as on background mortality from that disease, which is itself caused by other risk factors.

Despite major improvements in the data sources required for global estimates of smoking-caused mortality (e.g., mortality registration and adjustment of RRs for confounding), there still remains uncertainty about levels of smoking-attributable mortality, especially in developing countries with sparse data. The sources of uncertainty include:

The effects of these sources on the estimated attributable mortality have been quantified in previous analyses (Ezzati and Lopez, 2004; Ezzati et al., 2005a, 2005b).

The large number of deaths attributable to smoking illustrate that smoking is one of the most important avoidable risk factors for mortality worldwide, and responsible for more than 4% of the global burden of disease. More than one-half of smoking-attributable deaths occurred among men in lowand middle-income regions, mirroring the rise in smoking in much of the developing world over the past few decades (WHO, 1997). Accumulated hazards of smoking in developing countries, coupled with the shifting demographic and disease patterns, suggest that mortality as a consequence of smoking will continue to rise for the foreseeable future, and hence the avoidable disease burden will be even larger. Effective interventions and policies that reduce smoking among males, and prevent increases among females in the developing world (e.g., enforcing the Framework Convention for Tobacco Control) can curb and eventually reverse this increase. The estimates of regional and global mortality presented here provide a baseline for evaluating the implementation of tobacco control interventions and policies. Such an evaluation would however be helped with periodic monitoring of smoking using valid, consistent, and comparable instruments in different countries, including data by age and sex.