This sample Nonzero-Sum Game Research Paper is published for educational and informational purposes only. If you need help writing your assignment, please use our research paper writing service and buy a paper on any topic at affordable price. Also check our tips on how to write a research paper, see the lists of research paper topics, and browse research paper examples.

In game theory, nonzero-sum games (more precisely known as  nonconstant-sum  games) include  many  examples in which the sum of the payoffs to the players varies according to the strategies chosen. These cases are often more relevant to issues in social science and public policy than are zero-sum (and more generally constant-sum) games. From a mathematical point of view, however, they raise problems of solution that do not arise when the sum of payoffs is a constant.

An example arises in the case of public goods. Suppose that two agents acting independently can each earn payoffs of ten. However, each has the option of contributing three units from his wealth to produce two units of a “public” good  that  benefits both  players equally. The strategies then are “contribute” or “do not contribute,” and the game can be summarized in tabular normal form as shown in Table 1.

The Table is read as follows: Agent 1, by choosing his strategy, chooses the row, and Agent 2 chooses the column. In the chosen cell, the first payoff is to Agent 1 and the second to Agent 2. For example, at the top left, both agents contribute,  leaving seven units  each of  private wealth, but four units of the public good are produced, adding four additional units of benefits for each of the two agents. 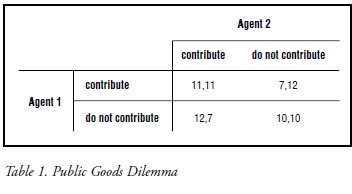 A game of this sort admits two broad classes of solution: cooperative and noncooperative. Cooperative solutions allow for the possibility that the agents may form a coalition and enter into a binding agreement to choose a joint strategy. In this case, it seems likely that they would both choose to contribute, because this choice makes both better off, while each would refuse to contribute if the other does not. Noncooperative solutions assume instead that there are no trustworthy commitments to joint action. In the case of the public goods dilemma, each agent can reason that he is better off choosing not to contribute, whatever the other may do, and moreover that the other player can reason in the same way. As a consequence, it seems that each would choose not to contribute. Therefore, “do not contribute” is the equilibrium of the game. The fact that each agent has an unconditional motive to choose the equilibrium  makes this  game an  instance  of  a  social dilemma. In  addition  to  public goods, noncooperative equilibrium concepts are applied to competition in industry, international rivalries, population dynamics in evolutionary biology, and many other issues.

In cooperative solutions of larger and more complex games, questions may arise with respect to bargaining and the division of the benefits from the common strategy and the stability of coalitions and agreements, leading to a number of alternative concepts of solution. Among noncooperative solutions, the equilibrium concept is dominant, but ambiguities can arise with respect to information and learning, and some alternative solution concepts have been explored.

A half-century of experimental work in social psychology, political science, and economics has indicated that both cooperative and noncooperative solutions influence human  behavior, but also that real human  beings often reason less carefully than the hypothetical agents of game theory.