This sample Survival Analysis Regression Research Paper is published for educational and informational purposes only. If you need help writing your assignment, please use our research paper writing service and buy a paper on any topic at affordable price. Also check our tips on how to write a research paper, see the lists of research paper topics, and browse research paper examples.

Survival analysis is a statistical methodology to study the occurrence of an event over time. It is referred to as survival analysis because it was originally derived in contexts where the event was death, but the event under study need not be death. Examples from the social sciences where survival analysis can be used are studies that investigate time from marriage until separation or divorce and intervals between births. 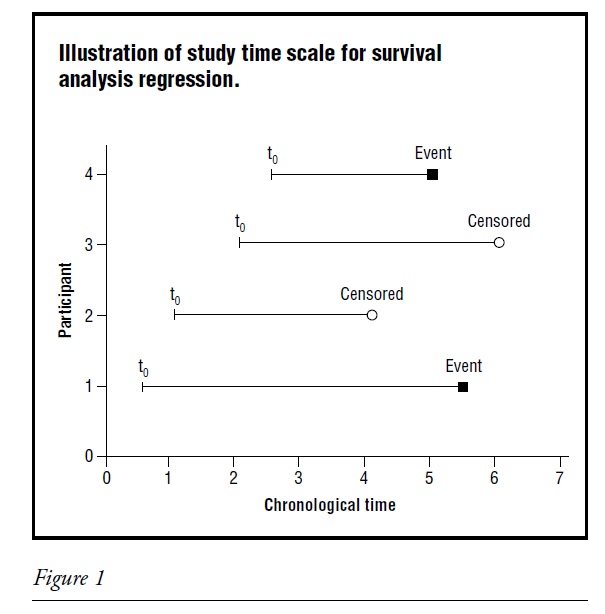 Survival analysis regression aims at investigating and quantifying the impact subject and study factors have on the time until the event occurs. These factors are often measured at study entry (t0) for each individual participant, and their effect on time to event is quantified via the hazard function of the survival time distribution. The hazard function models the rates at which events occur as a function of subject and study factors. Parametric and semiparametric methods are available for survival analysis regression. For details see Hosmer and Lemeshow (1999) or Kleinbaum and Klein (2005). The most frequently used model for analyzing survival data is the Cox proportional hazards model (a semiparametric model). It assumes that hazard rates are proportional over time but does not make distributional assumptions regarding survival times. Examples of parametric methods are the Weibull and accelerated failure time models, which assume specific statistical distributions for survival times in addition to assuming proportional hazards. Standard models assume independence between observations, but extensions of the models are available to accommodate dependencies (frailty models) between observations. Such dependencies might arise if participants, for example, are family members. Extensions also exist to accommodate multiple events, competing events, and factors that might change over time. On one hand the extension to multiple events and competing events is conceptually straightforward. Analysis involving factors that might change over time, on the other hand, are both technically and conceptually more involved. Survival analysis regression has been used extensively and successfully in various fields to quantify the impact of different factors on time to event.