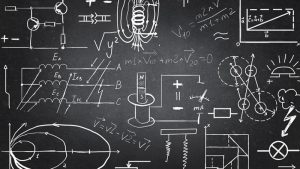 See our list of physics research paper topics. Physics is the science that deals with matter and energy and with the interaction between them. Perhaps you would like to determine how best to aim a rifle in order to hit a target with a bullet. Or you want to know how to build a ship out of steel and make sure that it will float. Or you plan to design a house that can be heated just with sunlight. Physics can be used in answering any of these questions.

Physics is one of the oldest of the sciences. It is usually said to have begun with the work of Italian scientist Galileo Galilei (1564–1642) in the first half of the seventeenth century. Galileo laid down a number of basic rules as to how information about the natural world should be collected. For example, the only way to obtain certain knowledge about the natural world, he said, is to carry out controlled observations (experiments) that will lead to measurable quantities. The fact that physics today is based on careful experimentation, measurements, and systems of mathematical analysis reflects the basic teachings of Galileo.

The field of physics is commonly subdivided into two large categories: classical and modern physics. The dividing line between these two subdivisions can be drawn in the early 1900s. During that period, a number of revolutionary new concepts about the nature of matter were proposed. Included among these concepts were Einstein’s theories of general and special relativity, Planck’s concept of the quantum, Heisenberg’s principle of indeterminacy, and the concept of the equivalence of matter and energy.

In general, classical physics can be said to deal with topics on the macroscopic scale, that is on a scale that can be studied with the largely unaided five human senses. Modern physics, in contrast, concerns the nature and behavior of particles and energy at the submicroscopic level. The term submicroscopic refers to objects—such as atoms and electrons— that are too small to be seen even with the very best microscope. One of the interesting discoveries made in the early 1900s was that the laws of classical physics generally do not hold true at the submicroscopic level.

Perhaps the most startling discovery made during the first two decades of the twentieth century concerned causality. Causality refers to the belief in cause-and-effect; that is, classical physics taught that if A occurs, B is certain to follow. For example, if you know the charge and mass of an electron, you can calculate its position in an atom. This kind of cause-and-effect relationship was long regarded as one of the major pillars of physics.

What physicists learned in the early twentieth century is that nature is not really that predictable. One could no longer be certain that A would always cause B. Instead, physicists began talking about probability, the likelihood that A would cause B. In drawing pictures of atoms, for example, physicists could no longer talk about the path that electrons do take in atoms. Instead, they began to talk about the paths that electrons probably take (with a 95 percent or 90 percent or 80 percent probability).

Like other fields of science, physics is commonly subdivided into a number of more specific fields of research. In classical physics, those fields include mechanics; thermodynamics; sound, light, and optics; and electricity and magnetism. In modern physics, some major subdivisions include atomic, nuclear, high-energy, and particle physics.

The classical divisions. Mechanics is the oldest field of physics. It is concerned with the description of motion and its causes. Many of the basic concepts of mechanics grew out of the work of English physicist Isaac Newton (1642–1727) in about 1687. Thermodynamics sprang from efforts to develop an efficient steam engine in the early 1800s. The field deals with the nature of heat and its connection with work.

Sound, optics, electricity, and magnetism are all divisions of physics in which the nature and movement of waves are important. The study of sound is also related to practical applications that can be made of this form of energy, as in radio communication and human speech. Similarly, optics deals not only with the reflection, refraction, diffraction, interference, polarization, and other properties of light, but also with the ways in which these principles have practical applications in the design of tools and instruments such as telescopes and microscopes.

The modern divisions. In the area of modern physics, nuclear and atomic physics involve the study of the atomic nucleus and its parts, with special attention to changes that take place (such as nuclear decay) in the atom. Particle and high-energy physics, on the other hand, focus on the nature of the fundamental particles of which the natural world is made. In these two fields of research, very powerful, very expensive tools such as linear accelerators and synchrotrons (atom-smashers) are required to carry out the necessary research.

Interrelationship of Physics to Other Sciences

One trend in all fields of science over the past century has been to explore ways in which the five basic sciences (physics, chemistry, astronomy, biology, and earth sciences) are related to each other. This trend has led to another group of specialized sciences in which the laws of physics are used to interpret phenomena in other fields. Astrophysics, for example, is a study of the composition of astronomical objects—such as stars—and the changes that they undergo. Physical chemistry and chemical physics, on the other hand, are fields of research that deal with the physical nature of chemical molecules. Biophysics, as another example, is concerned with the physical properties of molecules essential to living organisms.