This sample Torture Research Paper is published for educational and informational purposes only. If you need help writing your assignment, please use our research paper writing service and buy a paper on any topic at affordable price. Also check our tips on how to write a research paper, see the lists of research paper topics, and browse research paper examples.

As media accounts and images of torture, trauma, disaster, and rape permeate our daily lives, it is difficult to ignore the impact such destruction wields on the social fabric in which we live. Individuals directly affected by this devastation, such as refugees, asylum seekers, IDPs (internally displaced people), and illegal immigrants, struggle to piece their lives back together after enduring unimaginable cruelty and violence. The cruel and violent acts witnessed and experienced by these individuals come in many forms, one of the most common being torture. Though the word torture is commonly used without restraint in everyday language, its use should be clearly differentiated from words for inhumane and degrading actions that may fail to match the true definition of “torture.”

The two most frequently cited definitions of torture are the World Medical Association’s (WMA) 1975 Declaration of Tokyo and the definition given by the 1984 United Nations Convention Against Torture.

The 1975 WMA Declaration defines torture as: “The deliberate, systematic, or wanton infliction of physical or mental suffering by one or more persons acting alone or on the orders of any authority, to force another person to yield information, to make a confession, or for any other reason.” The 1984 United Nations Convention Against Torture expands upon this definition, distinguishing the legal and political components typically associated with torture:

Any act by which severe pain or suffering, whether physical or mental, is intentionally inflicted on a person for such purposes as obtaining from him or a third person information or a confession, punishing him for an act he or a third person has committed or is suspected of having committed, or intimidating or coercing him or a third person, or for any reason based on discrimination of any kind, when such pain or suffering is inflicted by or at the instigation of or with the consent or acquiescence of a public official or other person acting in an official capacity.

Currently accepted definitions of torture have two essential elements: (1) Individuals are placed in captivity and subjected to extreme mental and physical suffering; and (2) the captors have a political goal or agenda. In this way, torture as a legal definition can be distinguished from criminal acts of violence.

Types And Purpose Of Torture

The most common types of torture are summarized in Table 1. Torturers use these techniques to achieve several main goals. The most obvious intention of torture is breaking down an individual both physically and mentally (frequently for military or political purposes). Secondly, torturers seek to spread collective fear throughout a particular community or culture in which the victim lives. Finally, the torturer seeks to deeply humiliate the victim’s society and community. The goal of torture is essentially to render the victim nonhuman. 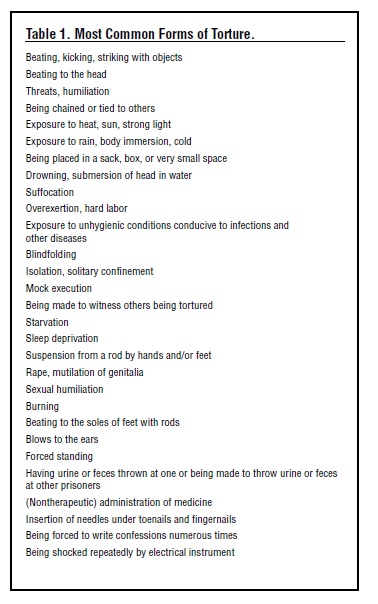 Table 1. Most Common Forms of Torture.

One important act of torture, for example, that has only recently been recognized as such is rape, a frequently used torture practice during periods of conflict and genocide. A group with a particular agenda often executes systematic or wanton rape and sexual violence knowing that the long-term effects of this experience will be devastating to both the individual and his or her community. However, rape was only recognized globally as an act of torture after the international appraisal of violence that occurred in Bosnia-Herzegovina and Rwanda.

Psychological And Physical Effects Of Torture

Knowledge of the types of torture described in Table 1 enables medical doctors, mental health professionals, and other health-care workers to assess the medical and psychological impact of torture and determine appropriate treatment. Until very recently, the psychological effects of torture have remained largely invisible. This is because of the combined effects of the difficulty of assessing mental symptoms in culturally diverse populations, the unsuccessful search by human-rights organizations for a unique “torture syndrome,” and the popular belief in some medical circles that extreme violence leads to the psychiatric diagnosis of post-traumatic stress disorder (PTSD). PTSD may be an appropriate diagnosis. However, this emphasis on PTSD has obscured the reality that the most common mental illness diagnosed in torture survivors is depression—often a serious and socially debilitating condition associated with serious medical consequences. While physical complaints in torture survivors are very common, usually these bodily complaints are the way people from various cultures express their pain and suffering.

Head injuries caused by beatings to the head with fists, clubs, or gun butts represent one of the most common physical effects of torture, leading to neuropsycho-logical deficits that are rarely identified. Studies have shown that victims of all types of torture often experience persistent and pervasive sensory and memory deficits, cognitive impairment, chronic pain, and certain forms of motor impairment (as serious as paraplegia) as a result of their torture experience. Other more specific physical symptoms commonly reported include headaches, impaired hearing, gastrointestinal distress, and joint pain. Scars on the skin and bone dislocations and fractures are also typically observed.

Since sexual violence is a common form of torture, its effects, including increased risk for cervical cancer, human immunodeficiency virus (HIV) infection and AIDS, and a range of sexual dysfunction including impotence, must be identified and treated by medical professionals.

Treatment For Victims Of Torture

Physicians and health-care providers throughout the world are frequently confronted with the need to identify and treat the physical and psychological impact of extreme violence and torture. It is estimated, for example, that 60 percent of individuals who seek asylum in the United States have been tortured, as have many refugees and migrant workers. A history of torture is common in various groups that have resettled in the United States and other countries during recent decades—Cambodians, Vietnamese “boat people,” and former Vietnamese prisoners of war (POW) who arrived in the 1980s; Central Americans who immigrated in the 1980s and 1990s; and recent arrivals from sub-Saharan Africa, the Middle East, and eastern Europe. Many newcomers enter the United States not only to find economic opportunities but also to escape violence and political instability at home.

Despite routine exposure to the suffering of victims of human brutality, many health-care professionals tend to be apprehensive about confronting this reality in their clinical work. Globally, clinicians often avoid addressing torture-related symptoms of illness, believing they will not have the tools or the time to help torture survivors once they have elicited their history. As a result of this resistance, survivors and clinicians may conspire to create a relationship founded on the avoidance of all discussion of trauma.

The most effective care for torture survivors must begin with awareness. Persons who have been tortured generally do not want to be treated simply as torture survivors. Rather, they prefer a holistic approach that addresses their current reality in a culturally sensitive way. Many characteristics of the patient’s background provide clues that torture may have occurred. As health-care practitioners become more empowered to ask questions such as, “Have you experienced extreme violence or torture?,” it becomes easier to identify and treat the pathological symptoms of such trauma.

Torture survivors often do not recognize any relationship between the torture and current medical problems they may be experiencing. When asked about specific events, patients are usually grateful that the clinician is aware of what they have suffered, is interested in their history, and is encouraging them to talk about their story. Though clinicians often fear a patient’s reaction to questions about torture, patients rarely become emotionally overwhelmed or lose control when such questions are asked. Some torture survivors, especially victims of sexual violence, may have been hiding their history out of feelings of shame or fear of stigmatization, and thus be grateful to talk to someone who cares. Others may come from cultures in which physicians are not expected to be interested in patient’s personal history.

Recovery For Survivors Of Torture

Many torture survivors recover from torture with the help of spiritual and religious practices, work, and altruistic activities that benefit themselves, their families, and their communities. These self-healing efforts need to be strongly supported by society and its health-care and mental health—care institutions. Human beings are incredibly resistant to even the most horrifying acts of human cruelty. While the majority of torture survivors recover without professional help, some do not. It has been shown that these individuals can greatly profit from proper medical and mental health care that will facilitate their return to a normal life.

A broad range of individual treatments exist that include primary health care, physical rehabilitation of torture-related disabilities, and psychological interventions aimed at eliminating traumatic memories, nightmares and chronic depression. Healing of torture survivors is also maximized when governments and the international community acknowledge the injustice they have suffered (e.g., the Truth and Reconciliation Commission in South Africa).