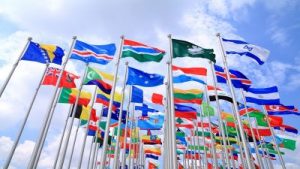 This collection of almost 100 political science research paper topics and example papers on political science highlights the most important topics, issues, questions, and debates that any student obtaining a degree in this field ought to have mastered for effectiveness. The purpose is to provide students in political science with an authoritative reference sources and sample research papers that will help their writing efforts with far more detailed information than short essays.

cover the history of the discipline (e.g., the behavioral revolution, the rise of neoinstitutionalism, and the postbehavioral critique), as well as several general approaches in political science (such as rational choice, political psychology, and principal–agent theory).

cover research paper ideas on the philosophy of science (including empirical approaches, positivism and its critique, and constructivism), followed by papers that illustrate commonly used quantitative and qualitative techniques (such as experimentation, and content analysis) and then by research papers on game theory and formal modeling approaches in political science. These research papers in particular are meant to be easily understandable to students who are just beginning to engage in political science studies.

The first efforts to systematically study politics can be traced to Plato’s Republic (c. 427–c. 347 BCE) and Aristotle’s Politics (384–322 BCE). Their works were later incorporated into Christianity through neo-Platonists, such as St. Augustine (354–430 CE), and neo-Aristotelians, such as St. Thomas Aquinas (c.1225–1274 CE). The classical and Christian traditions of political philosophy postulated metaphysical first principles and relied on a process of deductive reasoning that sought to derive the moral and ethical principles of an ideal-state. Whether the ideal-state was ever achieved by any civilization was considered secondary to discovering the “highest good” that ought to guide citizens and statesmen.

The political writings of Niccolo Machiavelli were the first to break with these traditions of political philosophy. Machiavelli believed that the study of political history could yield general principles to guide statesmen in the conduct of politics, diplomacy, and war. He studied existing and historical political institutions, and the actions of great statesmen, not for the purpose of discerning a morally ideal-state, but to identify institutional arrangements that would maintain social order and political stability. The separation of politics from any metaphysical or theological foundation led subsequent political philosophers to seek a new basis for legitimate political authority, although, in the end, solutions such as reason, natural law, custom, and tradition were superceded by the idea that sovereignty resides in a nation’s people.